In the early days of social media, I was at a family gathering where I fear I lost some street cred with my nephew. He was talking about ‘memes’ and he said something along the lines of “Quentin will know what those are”. Yes, I confirmed, just catching the end of the conversation. ‘Meme’ is a phrase coined by Richard Dawkins in 1976 in The Selfish Gene. He was exploring whether cultural ideas might reproduce and spread themselves in a similar manner to the genes for certain successful biological traits. At the time, though, my nephew was probably thinking more about pictures of kittens or celebrities overlaid with bold-faced subtitles! Still, the idea of a ‘meme’ has certainly had a fair degree of meme-like success, though it has mutated over time, and many people might be ignorant of its origin!

On the subject of origins, one of the most attractive types of meme is the one that says “Well-known person X said clever thing Y”. This was very successful long before the internet, but has truly flourished since. We all love a good quotation, particularly if we can put it on a poster with a picture of Winston Churchill or Albert Einstein. I was thinking of this recently on a call when I mentioned the famous one, “If we knew what we were doing, it wouldn’t be called research”. This is widely attributed to Albert Einstein, but probably wasn’t actually his. I have a list of some of my favourite quotes on my website, and many of them now have qualifiers alongside the attributions.

Terence Eden has just written a nice blog post on a quotation from Desmond Tutu:

A very pleasing idea, but Eden suggests that Tutu may never even have used it; in any case he almost certainly didn’t originate it. That honour is likely to go to Reginald S Lourie, a man of some eminence, but whose face, though genial enough, is much less well known than the good archbishop’s. Would this quote be as popular if it had had to spread this way?

The idea that a meme needs to attach itself to a successful organism does relate back to Dawkins’ ideas, though the effect is perhaps more closely aligned to parasitology or epidemiology than pure natural selection. (Dawkins himself was, I seem to recall, hesitant to push the meme/gene analogy too far.)

We need to be reminded of this regularly, to help us appreciate both that something isn’t necessarily true just because somebody famous said it, and that ordinary people can occasionally say extraordinary things.

As a great man* once said, “I dream of a world where the success of a great idea does not depend on the fame or fortune of its creator.” If this is your dream too, please spread the word by retweeting the image below.

Looking out of the window at present, I am reminded of a verse I learned in my childhood:

The rain, it raineth on the just
And also on the unjust fella.
But chiefly on the just, because
The unjust’s pinched the just’s umbrella. 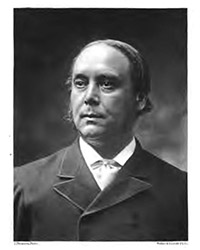 It’s rather pleasing to discover, investigating it now, that the verse comes from Lord Bowen, a notable lawyer of the mid-19th century. (There are a few variations on the precise wording of the last line, but I still like my mother’s version above.)

Bowen had many achievements in his life, both professional and literary, and I hope he won’t mind that I remember him for this rather than his translations of Virgil.

If, like most of mankind, you have passionate convictions on many such matters, there are ways in which you can make yourself aware of your own bias. If an opinion contrary to your own makes you angry, that is a sign that you are subconsciously aware of having no good reason for thinking as you do. If some one maintains that two and two are five, or that Iceland is on the equator, you feel pity rather than anger, unless you know so little of arithmetic or geography that his opinion shakes your own contrary conviction. The most savage controversies are those about matters as to which there is no good evidence either way. Persecution is used in theology, not in arithmetic, because in arithmetic there is knowledge, but in theology there is only opinion. So whenever you find yourself getting angry about a difference of opinion, be on your guard; you will probably find, on examination, that your belief is going beyond what the evidence warrants.

The sun never asks the earth for thanks.

More info about the source here.

“I don’t think necessity is the mother of invention — invention, in my opinion, arises directly from idleness, possibly also from laziness. To save oneself trouble. That is the big secret that has brought us down the ages hundreds of thousands of years, from chipping flints to switching on the washing machine.”

— Agatha Christie, from her splendid autobiography.

I’m in a lovely but slightly moist campsite in Norfolk. The climatic conditions are, I must admit, mitigated for us by the simply splendid heating system built into the campervan we’ve rented for a few days. We’re not really ‘roughing it’!

Anyway, inside the facilities block, where I’ve just been doing the washing up, there’s a large motto printed on the wall.

Life isn’t about waiting for the storm to pass.
It’s about learning to dance in the rain.

Yes. Amen to that!

A nice quote from Horace Dediu (an industry commentator who, amongst other things, does some very good podcasts):

Those who predict the future, we call futurists. Those who know when the future will happen, we call billionaires.

Little boots it to the subtle speculatist to stand single in his opinions,-— unless he gives them proper vent:— It was the identical thing which my father did;— for in the year sixteen, which was two years before I was born, he was at the pains of writing an express DISSERTATION simply upon the word Tristram,—-shewing the world, with great candour and modesty, the grounds of his great abhorrence to the name.

Hadn’t come across this one before, from Albert Einstein:

Geek quote of the day

From the lecture ‘Solitude and Leadership‘ by William Deresiewicz:

… Thinking means concentrating on one thing long enough to develop an idea about it. Not learning other people’s ideas, or memorizing a body of information, however much those may sometimes be useful. Developing your own ideas. In short, thinking for yourself. You simply cannot do that in bursts of 20 seconds at a time, constantly interrupted by Facebook messages or Twitter tweets, or fiddling with your iPod, or watching something on YouTube.

I find for myself that my first thought is never my best thought. My first thought is always someone else’s; it’s always what I’ve already heard about the subject, always the conventional wisdom. It’s only by concentrating, sticking to the question, being patient, letting all the parts of my mind come into play, that I arrive at an original idea. By giving my brain a chance to make associations, draw connections, take me by surprise. And often even that idea doesn’t turn out to be very good. I need time to think about it, too, to make mistakes and recognize them, to make false starts and correct them, to outlast my impulses, to defeat my desire to declare the job done and move on to the next thing.

Thinking for yourself means finding yourself, finding your own reality. Here’s the other problem with Facebook and Twitter and even The New York Times. When you expose yourself to those things, especially in the constant way that people do now—older people as well as younger people—you are continuously bombarding yourself with a stream of other people’s thoughts. You are marinating yourself in the conventional wisdom. In other people’s reality: for others, not for yourself. You are creating a cacophony in which it is impossible to hear your own voice, whether it’s yourself you’re thinking about or anything else. That’s what Emerson meant when he said that “he who should inspire and lead his race must be defended from travelling with the souls of other men, from living, breathing, reading, and writing in the daily, time-worn yoke of their opinions.” Notice that he uses the word ‘lead’. Leadership means finding a new direction, not simply putting yourself at the front of the herd that’s heading toward the cliff.

This is most commonly attributed to Albert Einstein, but the credit for it should probably really go to William Bruce Cameron, a Professor of Sociology.

More info on its history here.