The Hymn of Acxiom

This is haunting, beautiful, and spooky. And it’s from 2013, but I’ve only just discovered it.

It’s by Vienna Teng, and it’s most fun to watch her introduce it live:

But if you want the lyrics more clearly, someone’s done a nice transcription.

On John’s blog, for some weeks now, he’s been running a series of recommendations: Things to listen to instead of the morning radio news. This is a jolly good scheme.

I used to be a big fan of the BBC’s ‘Today’ programme, but have become ever more frustrated with the presenters, who are so much more interested in asking questions than in getting answers. Mishal Husain, in particular, seldom lets anyone finish a single sentence. And that’s even before you get to the contents of the news itself, which isn’t the most positive accompaniment to breakfast. No, if you want to read or listen to the news, do it a bit later on; don’t start or end your day with it — that’s my recommendation! The only thing worse would be starting and ending your day reading social networks.

Anyway, my variant on John’s scheme is that the most common command I used to give my Amazon Echo — “Alexa, play Radio 4” — is now increasingly replaced with “Alexa, play music by X”, where X is a classical composer. This does require you to have Spotify, Amazon Music or a similar music source linked to your Alexa account. (You’ll have quite a lot of Amazon Music available automatically if you have Amazon Prime.)

Why not try a few of the following over the next couple of weeks, to start your day on a different tempo?

Now, this post would have more impact if I finished it here, but I think it’s worth offering a few practical tips.

Finally, you will, of course, be limited by the audio capabilities of your particular Amazon device. If you have Sonos speakers or similar linked into your system, then you can use that instead. In my case there’s a big Sonos speaker hidden away on top of the fridge, and if I say “Alexa, play music by Chopin in the kitchen” to send the audio stream there, it’s a completely different experience.

And I think we can agree that Frederic deserves it.

There have been lots of wonderful examples during lockdown of the musicians from bands and orchestras recording individual parts at home which are then edited together into a combined performance. John linked to this rather pleasing Ode to Joy, for example.

But my favourite so far is from a few days ago: the NY Philharmonic’s version of Ravel’s Boléro. Play it on the biggest screen and best speakers you can manage!

In case you’re Googling for it, or in case I forget how to do it…

If you search online, you can can find various articles about how to take an MP3 or AAC audio file and make a .M4R-format file which an iOS device can then use as a ringtone. I’ve had a bit of Gilbert & Sullivan as mine for years, and have probably infuriated and/or amused those around me in equal measure when my phone starts announcing that I am the Captain of the Pinafore…

I lost this, though, in a recent wipe and re-install of my phone, after which I discovered that iTunes no longer makes it at all obvious how to put these custom ringtones onto your device. It’s easy if you buy them on the iTunes store, of course, but otherwise no amount of dragging and dropping would get my old favourites into iTunes or onto my phone. 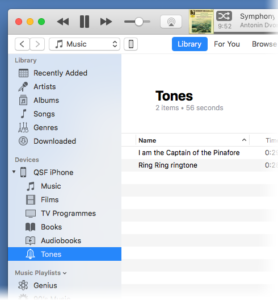 But it turns out that there is still a way, and it’s documented some way down on this Apple page. As a quick summary:

This works fine for me in iTunes 12.7 – no dragging and dropping needed. You should then see your ringtones, and be able to choose them in Settings > Sounds on the iPhone.

Guaranteed way to cheer up your day

This, I think, is quite fabulous. A jazz rendition of the Dr Who theme, by Bill Bailey.

How can you take a year and a half to make a 3-minute music video? Like this:

It’s even more amazing when you know how they made it. There are no green-screens here, and every frame is created by hand…

This has been out for a while, of course, but old people like me have just discovered it. (Old people like me might also be reminded of Peter Gabriel’s ‘Sledgehammer’ video, which was pretty amazing a quarter of a century ago…)

Another great track with another impressive rendition by Perpetuum Jazzile.

They’re on tour in Germany next month. More information on their web site.

Lots of people seemed to like the Perpetuum Jazzile video in my last post, so here’s another.

Man, these guys are good! Check back here for one more tomorrow…

Toto was one of my favourite bands, some scary number of decades ago. This is a fabulous cover of their most famous track, by a Slovenian jazz group…

Many thanks to Rob Feakes for the link.

At this time of year, as we know, angels are bending near the earth to touch their harps of gold.

John Naughton is posting links to an amazing interpretation of Pachelbel’s Canon on the electric guitar.

And I’m reposting a link to Jake Shimabukuro, who is bending near the earth in Central Park to touch his ukulele of gold. This piece transformed my view of the ukulele (which, I readily admit, wasn’t very well-developed beforehand!). (Update – that link is now dead. Try here.)

May you all have a musical, happy and peaceful Christmas!

While my ukulele gently weeps…

A truly fabulous version of ‘While my guitar gently weeps’ played on the ukulele by Jake Shimabukuro.

Thanks to the Creative Generalist blog for this and lots of other great stuff.