« A quarter-century on…
In the Beechwoods » 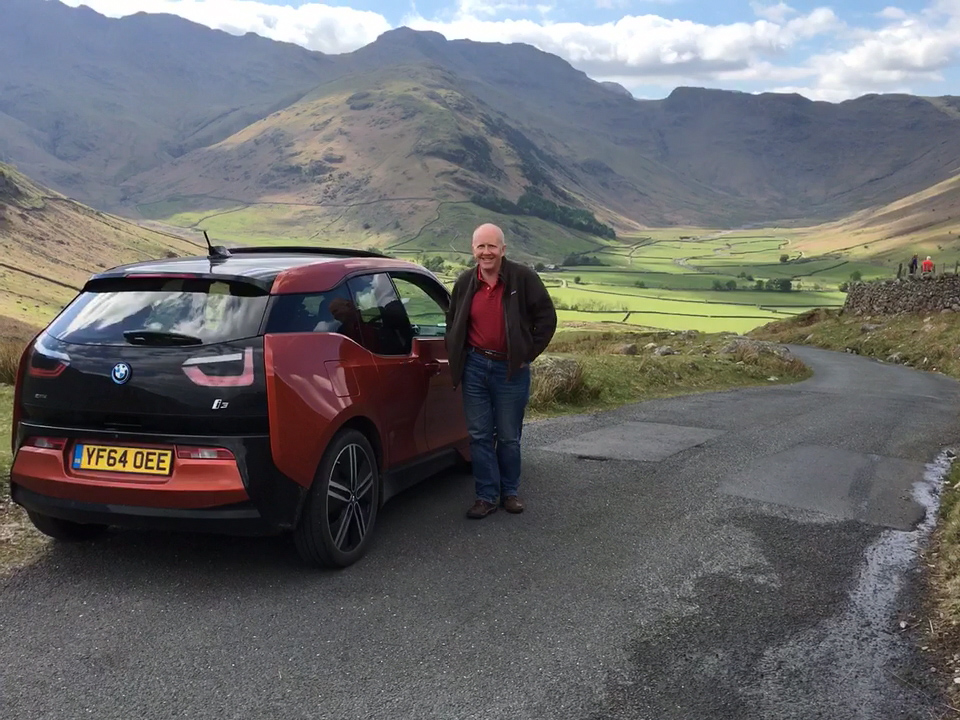 One of the questions I often get asked about my car is, “Is it all-electric, or is it a hybrid?” For most EV owners, the answer to that is easy, but for the BMW i3, it’s a bit more complex. You see, it is a hybrid in the sense that it does have a petrol engine, but it’s also completely different from most of the Toyotas, Mitsubishis, Hyundais, etc. out there.

The i3 has a ‘Range Extender’ option (known as the REX), which is a little 650cc scooter engine, not much bigger than a melon, and a two-gallon petrol tank. The engine never drives the wheels directly, and in fact, it doesn’t even really recharge the battery, but it can keep the battery at a constant level of charge while you’re buzzing along. So if I have a battery range of 70 miles and I need to go, say, 120 miles with no charging points en route, here’s what I normally do: I put my destination into the satnav, and then glide silently out of town and onto the motorway. When my battery has depleted to about 50%, I turn on the REX, and use a bit of petrol until the remaining satnav distance is less than my remaining battery range, at which point I turn it off again. This means I only get the (small amount of) extra noise on the highway, where there’s plenty of other noise anyway, I keep pollution away from the populated areas, and I arrive silently at my destination, having used the minimal amount of petrol.

For me, it’s the perfect combination. I’ve now done about 12,000 miles in this car, and I’ve used less than 12 gallons to do so, which means my average MPG is still in four digits. In 5-10 years’ time, we’ll have much bigger electric ranges, without having to pay Tesla prices, and charging points will be sufficiently common that the petrol bit will be unnecessary. (Unless I move to a remote part of Colorado or Australia, I think I have probably purchased my last fossil-fuel-burning car.) At some point between now and then, one of the major petrol companies is going to install rapid chargers on all their forecourts. There’s a rumour that it might be Shell. This will be a brave thing to do, because it will instantly make EVs massively more attractive to the ordinary driver and will make a dent in the revenues of all the oil companies. On the other hand, this process is inevitable, so you want to be the company that does it first. I watch with interest…

But let’s get back to the hybrid discussion.

The challenge that plug-in hybrid designers face is how wholeheartedly to embrace the battery. You see, there’s a tipping point: you can’t sit on the fence. For most hybrids, you are building a normal car, and adding all the cost, weight and complexity of batteries and an extra motor. You don’t get enough electric range to use it as a real EV, though you might get some pretty impressive MPGs if, say, you charge each night and have a short commute. But when you’re running on the battery, you’re dragging around a lot of unnecessary metal and liquids. When on petrol, you’re carrying a lot of heavy battery. You need to keep a big enough engine to do everything people expect of a traditional car as well as fitting in a big enough electrical system to make the battery bit worthwhile. Minimalism it ain’t.

The beauty of pure electric vehicles, in contrast, is just how simple they are: no gearbox, exhaust, piston rings, tappets, crankshafts, oil sumps, filters, radiators, fuel-injectors, spark plugs, catalytic converters… all that messy stuff just goes away. I had originally planned to get a plug-in hybrid; the Golf GTE caught my eye when it came out, and I enjoyed test-driving one of the first ones in the UK, but I’d been spoiled by that point, because I’d also driven a couple of proper EVs, and I realised that they had to be the future. I often tell people that if you have (a) another car and (b) a driveway on which to charge, there’s no real reason now, when choosing a second car, for it not to be all-electric. The Nissan Leaf or Kia Soul EV are great vehicles, and I started to think I could get something like that for my normal day-to-day use and park my old Golf out of town somewhere, to be fetched when needed for long treks.

But for us, it would be silly to have two cars, which is why the i3 was the perfect solution. All the benefits of an EV, with no ‘range anxiety’ and very little extra complexity. Unfortunately, in Europe at least, BMW are currently the only company making this combination, which means that to get it, you have to pay BMW prices: quite a change for someone like me who spent much of their life crawling under elderly Minis or Beetles. I hope some other manufacturers catch on soon, but in the meantime, I do at least get the satisfaction of driving what Munro Associates described, a couple of years ago, for a whole range of reasons, as “the most revolutionary car in terms of creative engineering and manufacturing since Henry Ford’s Model T”.