How I Flitted away my Friday afternoon!

Today, I got to ride the Flit Electric Bike! It was great fun!

Actually, it was much better than that; I was invited to visit their office in Cambridge and got to spend quite a bit of time meeting the team and distracting them from what they ought to have been doing. But they were great people, and very patient as I quizzed them endlessly to find out more about what I think is a really nicely-designed product.

A bit of personal background: I own an elderly (non-electric) Brompton folding bike which I got from my parents, and there’s a story behind why I’m particularly fond of that brand. My father had bad arthritis in his ankles meaning that, from an earlier age than one might expect, walking any distance was difficult, but he could cycle just fine. Some of us got together and gave him a Brompton, little knowing that it really would prove to be quite a life-changer. He could take it with him almost everywhere he went, and it allowed him to join in on family walks, get exercise, and see new places in a way he never could have done without it. For him it genuinely was a mobility vehicle, and I think it kept him out of a wheelchair for probably 10 years longer than might otherwise have been the case. My mother also got one soon afterwards, and until fairly recently, their car always had two bikes in the boot. So yes, I have a soft spot for this brilliant bit of British engineering, designed by a Cambridge engineer and finally brought to market after a long hard struggle.

To be fair, almost everybody loves Bromptons, though for most people the value is that you can cycle at all on something that folds away so ridiculously small; it’s not really the bike you’d probably choose to ride just for the joy of riding. There are compromises in rigidity, in cycling position, etc., which are apparent when you compare it to any regular bike (though I gather newer models may be a bit better than my ancient and well-travelled example!). And when Brompton came to build their battery-assisted version, they didn’t want to change too much of the basic design which had been so successful for so long. They did an ingenious and careful job of electrifying it, but it was always a retrofitting exercise to an existing layout. 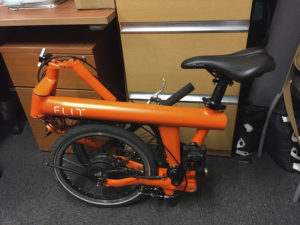 The Flit bike, on the other hand, was designed from the ground up as an electric bike, yet it folds almost as small as a Brompton, and weighs a bit less than their electric model. At present, it’s also cheaper, because Flit are selling direct; you can’t yet walk into a dealer and buy one. And in fact, even buying direct, you’ll need to be patient; they expect the first batch to ship in July. So the one I was trying was a pre-production model, but they’ve managed to sell quite a number through their crowdfunding campaigns, initially on Kickstarter and now on Indiegogo, which is impressive given that very few of those people, presumably, will have had the opportunity to go and try it out just a few miles from home, as I did!

But I don’t think they’ll be disappointed. I found it great fun and comfortable to ride, a good weight to carry, and easier to roll along the floor than any other folding bike I’ve tried. I can definitely see that if you lived a few miles from your nearest train or bus station, this would be a great way to get there. Or, say, to carry in your motorhome or yacht for trips to the nearest pub or grocery shop. OK, so it doesn’t fold quite as small as a Brompton. And it doesn’t have the load-carrying capacity of, say, the much larger and heavier Tern Vectron. Both of those are fine machines, but the Flit is noticeably cheaper than both of them at the moment and (in my opinion) nicer to ride than either.

I shall watch with interest as they ramp up production, and follow their blog, and I hope they have the success they deserve! 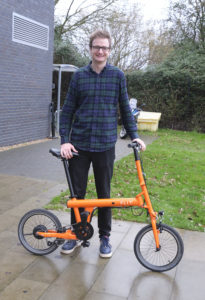 My thanks to Alex Murray, the Managing Director, for the invitation. (I first heard of Flit, by the way, on this excellent podcast, which I recommend for anyone interested either in bikes or startups or both!)