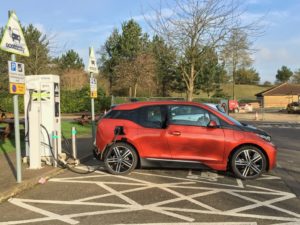 In the last couple of months there’s been a lot of discussion amongst electric vehicle owners in the UK about Ecotricity’s decision to start charging for its ‘Electric Highway’: the network of rapid charging points at motorway service stations and similar locations. Some think it’s outrageous that, if you’re charging away from home, it can cost as much per mile as petrol. Others point out that these charging points cost many tens of thousands to install and run, and the cost is therefore very modest. Personally, I think they have the pricing about right, but I wish they’d chosen a 15-minute granularity instead of going for 30-minute slots. But no doubt this will be tweaked over time.

One benefit of these chargers no longer being free is that there are fewer ‘casual’ users, or people hogging them for extended periods of time. If you turn up at a charging point now you’re very likely to find that it’s available, something that is, in fact, exceedingly important. (The ideal charging network is one that nobody else seems to use except you! It’s quite a contrast to petrol pumps, where the owners want them to be in use almost constantly.) However, this change is so apparent that some have speculated that almost nobody is using the pumps, and the whole idea is a disaster. The real numbers were, however, pure speculation for anybody outside Ecotricity.

Well, with some devilishly cunning technical tricks, I came up with a way to monitor a few charging points and see how they’re actually being used. I tried to pick a mix of some popular pumps, some I was just personally interested in, and some in more out-of-the-way places, so I settled on the charging points at:

And I checked them every 5 minutes for 4 days – a Fri, Sat, Sun and Mon – to see whether they reported their status as ‘Available’ or ‘In Use’.

Kettering, sadly, appears to have been out of action for all this time, as does one of the pumps at Baldock. And one of the Leicester Forest pumps was reporting ‘Swipe card only’. So for this (small and completely unscientific) trial, I effectively had 6 locations and a total of 12 charging stations. And here’s what I found:

Each dotted horizontal line represents a normally ‘Available’ pump and the vertical marks indicate when it is ‘In use’. The five minute period of my checks mean that a standard half-hour charge is shown by roughly six little vertical lines.

A few points to note:

Here are some numbers derived from the data:

With the exception of the Wembley IKEA points, you can turn up between 7am and midnight and have at least an 85% chance of finding one of these free.

Now, these pumps may not be representative, being generally rather London-focussed, especially since a couple of my more rural ones didn’t yield useful data. I’ve included one which was offline and excluded a couple of others. And all of my figures are very approximate, so should all be taken with a big pinch of salt. But my estimate is that Ecotricity are making £1-2M per year from the network at this rate.

In their announcement about the introduction of the charges they talked about having provided £2.5 million pounds worth of free travel in the first five years of the network. It grew from nothing to its present size over that period, so we might assume that the annual costs of about £0.5M represent the half-way stage and that they were getting close to £1M p.a. at the end of the free period. I don’t believe these numbers include the substantial installation costs of the pumps, which are apparently around £30-50K each. Nor, I think, do they include the salaries of support staff, etc.

But overall, my analysis, for what it’s worth, would suggest that the current charges are not too wide of the mark for what they need to run a sustainable network. It won’t make much profit nor allow much further development, but nor will it run at a huge loss, as it has up to now. Fortunately Ecotricity have a variety of motivations for this work, and not all of them are profit-based.

I could attempt a more substantial analysis, but the APIs I was using are probably not meant to be public and I didn’t want to trespass on their good will. If anybody from Ecotricity would like to authorise me to capture more data (or offer me a job to keep me quiet!) I’d be delighted to talk!

The network will need further investment, since the number of electric vehicles on the road is growing fast. This is offset somewhat by the fact that their electric range is also increasing, so charging points are needed less frequently. But analysts are predicting surprisingly short timescales for us to reach the point where the majority of our cars are electric, so it’s a fascinating space to watch…

Excellent work. By chance I just started a very similar exercise today so I’ll let mine run a few days and see if I can reproduce your results. I’m using a different set of locations (though we both chose South Mimms) so it will be an interesting comparison.

BTW, regarding your ‘300’ number, I actually counted them: there are currently 282 rapid chargers spread over 178 locations. 25 of these chargers in 20 locations are free (19 Ikea’s + Green Britain Centre). There are also 37 slow posts. Green Park Reading is the 179th location and the only one with no rapid charger.

Well, I said profit because I did subtract an estimate of the electricity cost from the revenues. (I estimated 18kWh per session at 8p/kWh which may be rather high since they are an electricity company so the cost to them might be rather lower!)

Doesn’t include all the other costs, of course, but at least it’s the profit on the pure electricity charges.

I calculated 22 paying charges per day and 55 non paying charges, Ecotricity customers. I think if you take out the ikea sites which are not earning money and factor the ratio of paid to free customers I think potentially the revenue is overstated. I didn’t see the factor to represent this in the revenue number?

You may well be right, which was why I tried to be conservative, though I’d be surprised if your figure of nearly three-quarters of EV drivers being Ecotricity customers was generally the case.

I’m not one, for example, and would like to be, but in my area they are at least £300-400 p.a. more expensive than my current plan. So I decided that if even a fairly small percentage of drivers signed up for that in order to get the free charging, that would boost the company’s income significantly elsewhere which would offset the fact they and several of their friends weren’t paying for the charging.

But I think there must be something else going on with the receipt number analysis, since I got 30-something charges per day from these 12 pumps alone?

So, it’s all rather approximate, which was why I was very vague about the £1-2M estimate. I can certainly be persuaded that it’s at least at the lower end of that! But it’s more data than we had before, at least!

Also do not forget any site host rental charges they incur. That’s a fixed overhead, and OPEX rather than CAPEX. Though these are probably ‘commercially sensitive’, I gather that some site hosts require no persuasion to let Ecotricity put chargers on their site, and others probably charge a fair bit more rent. There’s standing charges for a high current three-phase electricity supply that they (even as a retail electricity supplier) have to pay to the local DNO. That would be OPEX too.

OPEX costs also include staffing, both front office and back office, and of course, repair costs – either ad-hoc or contracted. It’s been reasonably well documented how difficult the DBT units are to work on and debug, often requiring site visits for things that can be done remotely with other designs.

Great news for the UK’s electric-vehicle driving community (which will soon be all of us) | Status-Q
10:05 am
Reply
Click here to cancel reply.

[…] not sure the figures have ever been made public. In 2016, they started charging for charging, and I did some crude analysis and defended the pricing, which some people thought too high. Still I doubt they’ve ever made any significant money on it, and it was probably a loss-leader, […]