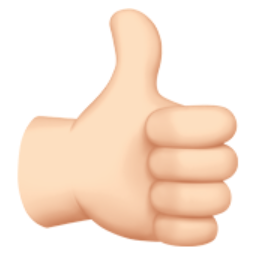 I sent an emoji today. Not quite my first, because various systems have been converting my colon-dash-parentheses into smiley or sad faces for some time, but I think it was the first time I’ve deliberately sent one knowing the recipient would see it as a picture.

In this case, it was a ‘thumbs up’, which I sent to John Naughton in reply to an incoming query, because I had my hands rather full at the time, and I could at least do that with a couple of taps on my watch. I guess they’re useful for that level of communication when you don’t have access to, say, a keyboard.

In general, though, I’m rather confused by this apparent belief that a return to hieroglyphics is a good idea, and that people are willing to send messages expressing emotions when they often have little idea of what the receiving party will actually see – this may be rather different from what you thought you sent. At least we didn’t have that problem with the clip-art of the 90s… and it still went out of fashion.

This is the way our communication technologies progress: first, we neglect spelling and grammar. Then punctuation goes by the board. Now we can abandon words altogether, and start using other people’s primitive pictures. Soon, I imagine, the internet will give us a way to say “Ug” while hitting each other with jawbones.

Still, for better or worse, Apple and others feel the need to issue complete operating system updates where new and improved emoji are the main feature. Did you know, for example, there is now an official unicode character for a man-with-slightly-dark-skin-getting-a-face-massage? It’s hard, looking back, to conceive that Proust, Hemingway and Dickens were all able to communicate so effectively when their character set didn’t include any face-massage symbols at all!

Still, if you want to know everything there is to know about the wonders of this new alphabet, then Emojipedia is a good place to start. And because they are actually official unicode characters, you can even use them in, say, URLs. This is completely valid, though your browser might not yet think so.

Try giving that address to somebody over the phone! Ah, but I guess the youth of today are unlikely to do that, because using a phone would also involve using words…