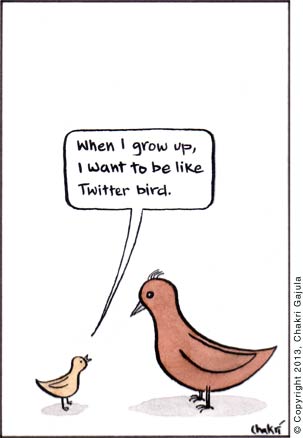 In the beginning, Twitter only allowed messages to be 140 characters long. This was because SMS text messages were a common way of posting, and sometimes receiving, tweets, and they were limited to 160 characters; allow 20 characters for a username, and 140 is all you have left: about 20 words.

Two years ago, Twitter expanded the maximum length from 140 to 280 characters, though they said soon afterwards that this hadn’t actually made much difference to the average tweet length. It did, however, reduce the number of abbreviations – remember b4 this, when everything was gr8? Thank heavens we don’t have so much of that now, though I suspect an improvement in phone keyboards also played a significant role in the change.

Last night, I was contemplating the new trend for people to write long spiels using Twitter ‘threads’; typically one sentence per tweet. Sometimes you see them with ‘1/17’, ‘2/17’ etc after each post. It works, but it really seems as if Twitter is being stretched beyond its design!

I suppose the alternative would be to use Facebook, but who wants to do that?

So I was feeling a bit nostalgic for blogs and RSS feeds. Just imagine how good social media would be if:

Don’t get me wrong, I do use Twitter, and I’ve had an account for over 11 years now, but I’ve had a blog, and read other blogs, for much longer, and if I ever had to make a choice between losing Twitter or losing my RSS feeds, I’d soon be waving bye-bye to the little blue bird.

But then I realised this was crazy thinking. Imagine if you had to show you could write a whole sentence before you could be elected President? Or even a paragraph just to announce a major change in policy? I guess nothing would ever be accomplished…