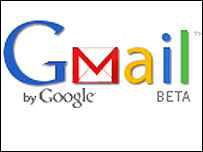 Ah, nostalgia! I’ve been looking back at the first messages I sent right back in 2004 using the latest hot new web phenomenon: a beta version of the recently-announced GMail. (I had a friend who had a friend in Google, so got an invitation fairly early.)

They are mostly examples of literary brilliance such as:

Let’s see how it works.

But later that day I had settled down a bit. Here’s an extract from a message I sent to John:

It’s a very nice webmail system, with an unusual amount of storage available per person (1G).
My concerns with the current beta are:

(a) I have 0.7G of email already on other systems, so it wouldn’t be a complete solution for long, and

(b) it really is, at present, just a webmail system. It’s the nicest one I’ve used, but it has no IMAP or other access, and hence no way to export your email. Meaning that messages in Gmail can never be moved to another system. (Though there are some scripts out there which connect, parse the web pages etc)

I imagine they’ll have to add this in some form before too long, but I’m also sure they don’t want to make it too easy. In particular, they probably want to keep the browser as the main interface so they can control advertising around the email.

Back then, a free email account was pretty rare, and a free e-mail account that gave you a whole gigabyte of storage was amazing!

In the intervening 18 years, I’ve never used my Gmail address as my main account, but it has been handy as a backup. I forwarded copies of incoming messages there from my main account, for example, until I realised it was probably foolish: I was giving Google access to all of my life history without even making use of the free email service in return! But I am a big fan of some of the other Google services, and a heavy user of YouTube, Google Maps, and to a lesser extent Google Docs, so having a Google account has always been important. I even earn a little bit of pocket money from some of my YouTube videos.

I did like the early versions of Google Docs which actually let you edit the CSS used in rendering your document, so you could make it look just as you wanted! Sadly, that feature went away in 2010. And I’m conscious that Google products and features do have a tendency to vanish rather unexpectedly.

I expect the ones I’ve mentioned above are pretty safe, but this page is a nice reminder that the free product you depend on today may not be here tomorrow. 2022 is the tenth anniversary of the demise of Google Video, for example, and this blog used to have quite a few links to content there. That was probably pretty safe, wasn’t it? It had been around for seven years, after all! My golden rule about making sure you can get your data out of any system in a useful form, before putting too much of it in, is particularly applicable to Google products.

There’s no such thing as a free inbox

Anyway, the good news is that my Gmail messages are still around, and Google now give you 15x as much storage for free as they used to, but that’s not enough for the amount of old email I’ve been storing there. I’ve been paying a modest amount for Google One storage for the last couple of years, and that’s no bad thing: for a service to be sustainable, its true costs do need to be met somehow. Buy my subscription has just come up for renewal, and since I already pay for cloud storage in a couple of other places that don’t also use my data for other purposes, I’ve decided to thin down the amount of stuff I’ve been keeping on Gmail. My account isn’t going away, but it’ll just be a temporary space; all the important stuff will be sent elsewhere.

The good news is that Gmail did introduce support for IMAP a few years after my early messages, so moving my 17GB of Gmail messages over to join the 24GB in my main account is much more straightforward than it would otherwise have been! (There will be a lot of duplicates, and if you’re doing anything similar and are happy on the command line, you might find my IMAPdedup script useful to get rid of them.)

Lastly, even though I recognise and appreciate the innovation and usefulness of some of them, I’m very glad that I didn’t invest any serious time in any Gmail-specific features!
You may have seen my article a few months ago about why I, and a significant number of my colleagues, will no longer keep important data in our Cambridge University email accounts, for similar reasons.

P.S. You can use these nuggets of wisdom for free at the moment, but I don’t have a sustainable business model for them yet, so I may need to charge you gradually-increasing amounts for them in the future.

We had fun on Rutland Water on Friday.