Zoom calls of the past

Rose is moving from her current college office to a new one. In the bottom of a drawer, she found a Zoom modem. 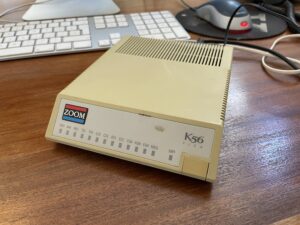 For younger readers, this is a 56K modem, which means that on a really good day, you could transfer data to and from the network at 56 kilobits per second: that’s about 6 kilobytes/sec, once overheads are taken into account. This was pretty much the peak of telephone-based internet access, until ADSL came along.

Also in the same drawer was a floppy disk, which holds around 1.4MB. (I used to boot my first Linux system off one of these.) 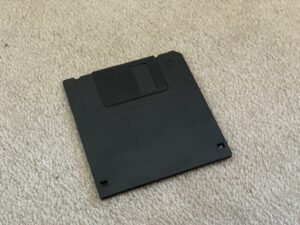 So, to transfer the contents of this disk to the network using the modem, if you had a good reliable phone line, would take you about 4 minutes.

Now, the two originals of the photos above, which I snapped with my iPhone, between them take 7MB, or about 5 of those floppy disks, so to send the two still images would have taken around 20 minutes. (Not that we had digital still cameras at all back then, of course.)

This is why, when James T Kirk makes a call from his quarters to the bridge of the Enterprise, it’s almost always an audio call, and on the rare occasions when video is involved, they make sure they show you – it was such a wildly futuristic idea, even within the same starship! 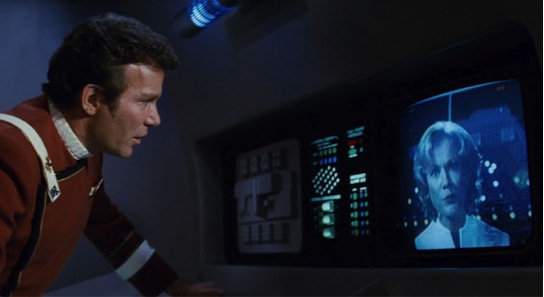 Nobody, even on Star Trek, was daft enough to suggest he might make such a call from his communicator.