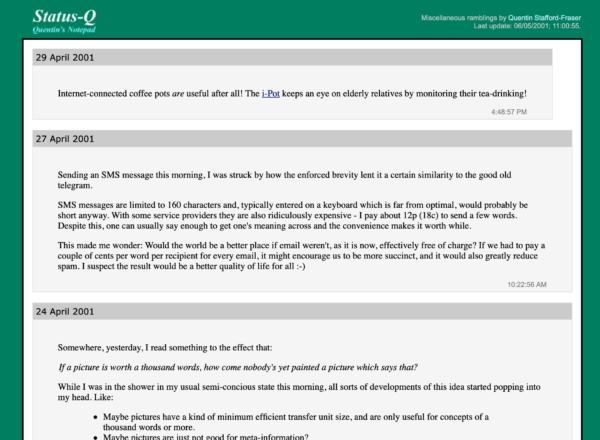 Euan Semple and I have been having similar thoughts. In a perceptive post he writes:

…As people have moved into places like Facebook and Twitter the energy has moved away from blogging to some extent. Less comments and less people using RSS to track conversations. I, like many bloggers, used to post links to my blog posts on Facebook or Google+. Then I realised that I was expecting people to move from where they were to where I wanted them to be – always a bad idea.

So I started posting the entire content of my blog posts on Facebook and Google+. The process is the same, I get the same benefit of noticing things that blogging gives me, the same trails left of what caught my eye, but the conversations have kicked off. I love the forty or fifty comment long threads that we are having. I love the energy of the conversations. It’s like the old days…

And I have to agree. Much as I dislike the tabloid-style, ad-infested nature of Facebook, it does seem to be where the conversations are happening. Yes, some of the smarter people are on Google Plus and App.net, but just not very many of them, and I’m letting my App.net subscription lapse this year. I am even starting to tire a little of Twitter’s 140-character limit and, more so, of the difficulty of having real multi-person conversational threads there. And even though it’s now easy to reply to posts here on Status-Q using your Facebook ID, where your thoughts will be preserved for viewing by other readers, many more people prefer to comment on Facebook or Twitter when I post notifications there.

Euan and I have both been blogging for about 13 years. In that time, a variety of other platforms have come and gone. I expect that quality blogs like his and John’s will outlive Facebook, too. At the very least, I expect that I’ll be able to find good past content on them (see my recent post), long after the social network of the day has changed its ownership, its URL structure, its login requirements or its search engine. So I’m not going to be abandoning Status-Q any time soon: it’s not worth putting much effort into anything that you post only on one of these other platforms.

But his idea of cross-posting the whole text of one’s articles is an interesting one. Facebook is clear, at least at present, that you still own it, though they have a non-exclusive right to make extensive use of it – something those of us who occasionally post photos and videos need to consider carefully.

But I also need to consider the fact that I actually saw his post on Google+, even if I then went to his blog to get a nicely-formatted version to which I could link reliably. Mmm.

It’s 12 years today since my first blog post — the first post, at least, on a publicly-readable system that we’d recognise as blog now. I had registered this ‘statusq.org’ domain a couple of days before, and started tapping out miscellaneous thoughts with no particular theme, and no expectation of an audience.

I was using Dave Winer’s innovative but decidedly quirky ‘Radio Userland’ software, a package which is long since deceased but was very influential in the early days of blogging and RSS feeds. Over the years I’ve moved the content through a couple of different systems but I think — I hope — that all the URLs valid in 2001 still work today! Most of my early posts do not have a title. The convention of giving titles to what we thought of as diary entries wasn’t yet well-established.

Things that caught my attention in the first couple of months included: