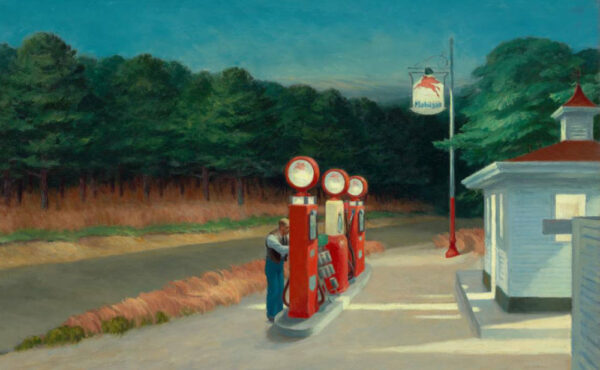 A few years ago, I was involved in a big brainstorming session with some senior staff from BP. We had gathered, from both sides of the Atlantic, to consider some of the implications of technology changes on their business, and one of the topics discussed was the future of the retail forecourt: the petrol station, as most of us know it today. There was one thing we were all pretty much agreed on about its future: that it hadn’t got one.

The problem is that electric cars give you a very different refuelling experience from cars burning dinosaur juice. The bad news is that it takes longer, as we all know. Even when I’m charging my Tesla at speeds that would have astonished me when I first started driving EVs, I’m still generally there for 20-30 minutes, rather than the five minutes I would have spent filling up with petrol.

But the good news is that you don’t have to stand there while it’s happening, shivering, breathing in those lovely fumes, and wondering if your shoes will reek of diesel for the rest of the day. Instead, you can be inside the car watching the latest episode of your favourite show, or having a drink at the nearby cafe, or taking the dog for a walk. One of our favourite superchargers is in a multi-storey car park near Bristol, where you can just plug in and stroll over to John Lewis to purchase pillowcases, or whatever takes your fancy.

(As an aside, I think this is very healthy: on long drives, it’s important to take a proper break every so often, not just for your own wellbeing, but for the safety of those you may be approaching at speed later in the journey. EVs almost enforce that.)

Now, you could beef up the shopping/dining experience at some petrol stations, but it’s not really enough. The problem for those who have invested large amounts in forecourt real estate is that these stations are generally the wrong size for charging points — you need bigger parking areas and bigger retail areas — and many of them are not where you’d actually want to spend much time: on noisy town-centre roundabouts or on the edge of a busy bypass. Add to that the fact that they aren’t necessarily in good locations for a high-power connection to the electricity grid, and you’d think it probably makes sense to start selling them off. Oh, except you’ve spent a few decades storing and spilling toxic liquids there, so that’s a bit tricky too.

After the gas has gone…

We discussed other possible uses for the sites, which, despite some problems, do have the merit of being close to good road links, and often close to towns.

One idea was that they might become last-hop delivery hubs. Instead of fuel tankers rolling in during the night to top up the tanks, it would be big Amazon trucks coming to offload their parcels. Then a fleet of smaller electric vans would zip out from there during the day, doing the deliveries.

Someone else pointed out that there’s another service to which people often need quick and easy access while travelling: the loo! Yes, petrol stations are ideally placed for public conveniences, but up to now, that part of any visit has not always been very inspiring! Apparently one gas station chain in the States made their toilets a feature, advertising that they had the nicest bathrooms in the business! I thought this was very smart: there’s not much else to distinguish one station from another, so this was a cunning way to make your visit one of choice (as well as necessity!) Could you, we wondered, actually dispense with the petrol station, and instead draw people to your roadside retail experience through the quality and cleanliness of the adjacent WC? I like that idea, though it might require some clever marketing!

I suggested that they might want to develop a brand and business that wasn’t tied to particular premises in the same way. In the past, petrol stations were expensive and difficult to install, and they added retail experiences onto them to try to increase the profitability of each visit. But in the future, what people would want was not a Costa Coffee shop next to their refuelling point, but a refuelling stop next to their Costa Coffee. And that was much more viable than it ever had been in the past. Who was going to make it really easy for a supermarket, restaurant, shopping mall or pub to turn their existing car park into a charging centre? This, I thought, was an opportunity.

(Interestingly, almost on that exact day, it also became public that BP were buying the Polar/Chargemaster charging network, which was a smart way to get a good foothold in the charging world in the UK.)

Anyway, just to finish this on a personal note, and to show they’re not all bad, I do have a favourite petrol station, of all the ones I’ve visited in my life.

It stood right on the side of a Norwegian fjord, not far from a cottage where I stayed with my parents and grandparents on holiday sometime in the mid-1980s. You filled up your tank in a gentle sea breeze, surrounded by some of the most stunning scenery I’ve ever seen, and then strolled into the shop to pay. This was also the local grocery shop for that side of the fjord. (For the post office, bank, and the other shop, we would just go into to the cottage’s boathouse, get into the dinghy and chug across to the other side of the water.) Anyway, I remember that the two or three fuel pumps had unusually long hoses, because they were also sometimes used to fill up the boats which could pull in just as easily as cars.

And in the spaces between the pumps? Flower boxes.

Yes, that was a really lovely spot to fill up, and it would also make an amazing charging station. Perhaps, knowing Norway, I’ll be able to go back someday in my current car and fill up again…