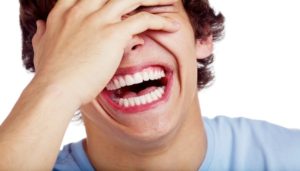 If you go back and watch (or listen to) comedies from an earlier age, one thing that often stands out is the volume of the audience laughter track. The fashion for including laughter, whether from a live audience or from a canned track, has changed over time, but has generally declined in recent years and, to modern ears, too much laughter can make the show sound fake, or at least dated.

I’ve sometimes thought this would be a good use for multi-channel sound: if there were a separate laugh track, you could include it or not, or turn it up or down, according to your own taste, when watching those old Blackadder or Seinfeld episodes.

Who knows, fashions may change in future and go the other way, and then we’ll want to turn it up again.

But it turns out that the history of laugh tracks is quite interesting. People do laugh more when they aren’t laughing ‘alone’, so including laughter in comedies was seen as beneficial from the start. But because early studios usually had limited numbers of cameras, and recordings involved multiple takes of the action from different angles, you couldn’t rely on an audience to laugh consistently, or indeed at all, after they’d seen the same gag several times. So appropriate laughter had to be added back in to the final product anyway, and after a while the idea caught on of using recorded laughter without actually needing an audience there at all.

The Wikipedia page on the topic is surprisingly long and interesting. Here’s an extract:

From the late 1950s to the early 1970s, Charley Douglass had a monopoly on the expensive and painstaking laugh business. By 1960, nearly every prime time show in the U.S. was sweetened by Douglass. When it came time to “lay in the laughs”, the producer would direct Douglass where and when to insert the type of laugh requested. Inevitably, arguments arose between Douglass and the producer, but in the end, the producer generally won. After taking his directive, Douglass would then go to work at creating the audience, out of sight from the producer or anyone else present at the studio.

Critic Dick Hobson commented in a July 1966 TV Guide article that the Douglass family were “the only laugh game in town.” Very few in the industry ever witnessed Douglass using his invention, as he was notoriously secretive about his work, and was one of the most talked-about men in the television industry.

Douglass formed Northridge Electronics in August 1960, named after the Los Angeles suburb in the San Fernando Valley where the Douglass family resided and operated their business in a padlocked garage. When their services were needed, they would wheel the device into the editing room, plug it in, and go to work. Production studios became accustomed to seeing Douglass shuttling from studio to studio to mix in his manufactured laughs during post-production.

The sophisticated one-of-a-kind device — affectionately known in the industry as the “laff box” — was tightly secured with padlocks, stood more than two feet tall, and operated like an organ. Only immediate members of the family knew what the inside actually looked like (at one time, the “laff box” was called “the most sought after but well-concealed box in the world”). Since more than one member of the Douglass family was involved in the editing process, it was natural for one member to react to a joke differently from another. Charley himself was the most conservative of all, so producers would put in bids for son Bob, who was more liberal in his choice of laughter.

Douglass used a keyboard to select the style, gender and age of the laugh as well as a foot pedal to time the length of the reaction. Inside the machine was a wide array of recorded chuckles, yocks and belly laughs; exactly 320 laughs on 32 tape loops, 10 to a loop. Each loop contained 10 individual audience laughs spliced end-to-end, whirling around simultaneously waiting to be cued up. Since the tapes were looped, laughs were played in the same order repeatedly. Sound engineers would watch sitcoms and knew exactly which recurrent guffaws were next, even if they were viewing an episode for the first time. Frequently, Douglass would combine different laughs, either long or short in length. Attentive viewers could spot when he decided to mix chuckles together to give the effect of a more diverse audience. Rather than being simple recordings of a laughing audience, Douglass’s laughs were carefully generated and mixed, giving some laughs detailed identities such as “the guy who gets the joke early” and “housewife giggles” and “the one who didn’t get the joke but is laughing anyway” all perfectly blended and layered to create the illusion of a real audience responding to the show in question.