« A rare East Anglian lakeside walk
One man and his vlog » 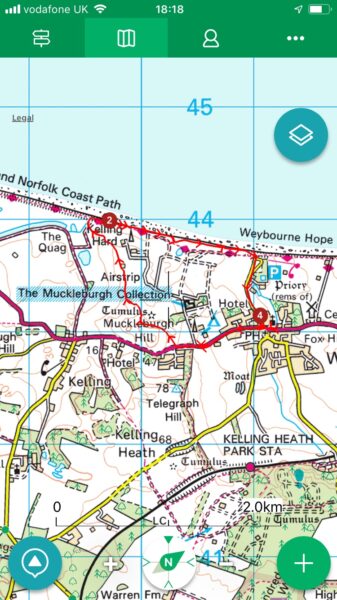 I’ve long been a fan of the ViewRanger app for handling maps on my phone. I know I’ve been using it for at least 8 years, because I have tracks recorded from early 2012.

With it, you can use free maps, and buy commercial ones from a range of sources, in many countries, and pay for them in a variety of ways: subscriptions, individual purchases, or — the method I use because I started before the days of in-app purchases — buying a block of credits up front and using them as needed to purchase the map tiles you’re interested in. ViewRanger isn’t perfect: I find bits of its user interface very counter-intuitive, but in general it’s served me very well.

Another worthy contender for UK users, by the way, is the app UK Map, written by a good friend of mine, and which I’ve been using even longer than ViewRanger. UK Map has always provided a great combination for users here: a standard basic UK road atlas, always available offline; the ability to download the free Ordnance Survey maps (since almost the moment they became available), and the overlaying of paths from OpenStreetMap, which are often the most up to date indications of where you can actually walk. More recently, it too gained the option to buy premium maps, but by then I was somewhat invested in the ViewRanger ecosystem. Nonetheless, I do recommend UK Map – it’s helped me out on more than one occasion when I found myself completely out of phone coverage and just needed a good old-fashioned street atlas, for example. Don’t be fooled by its lack of flashy graphics and fewer immediately-obvious features. Phil, the author, is a very smart guy and knows what he’s doing. It’s worth having on your phone.

Maps have always held a fascination for me, and their combination with technology especially so. I remember I was in Seattle on the day the iPad was released, and so was able to get one that day, about 6 weeks before most of my European contemporaries. (I’m still a bit smug about that!) It only took me a few hours, though, to realise it was the best map-viewer I had ever seen. A zoomable, infinitely-scrollable, tactile display that was also big enough to show a reasonable area? Amazing. (The main thing I miss, by the way, about no longer also having an iPad Mini is that it combined most of that with the ability to fit in a coat pocket.)

Anyway, this is all old hat now. We almost all wander the footpaths and byways gazing at our phones, rather than unfolding bits of paper from our map pockets. They do, after all, have that undeniably useful extra feature – the little blinking dot or crosshairs showing where you actually are. And zooming and scrolling mean that the place you’re heading for is no longer on the other side of the fold! I do find, though, that zoomability means I’ve lost the intuition I used to have about how long it would take me to walk a certain number of inches…

There’s another problem, too, with phone-based navigation, that I’ve found in the soggier parts of the UK: touchscreens, and indeed fingerprint readers, really don’t work very well in the rain. The process of extracting the phone from a damp pocket, trying to find something less damp to wipe it on, failing to unlock it with my fingerprint and having to type a PIN before trying to manipulate a semi-responsive touchscreen has just occasionally left me thinking that even damp paper would be preferable to electronics.

Because today I discovered something I should have noticed some time ago. ViewRanger has an interface for the Apple Watch. If it’s running on my phone, I can simply raise my wrist to see where I am. 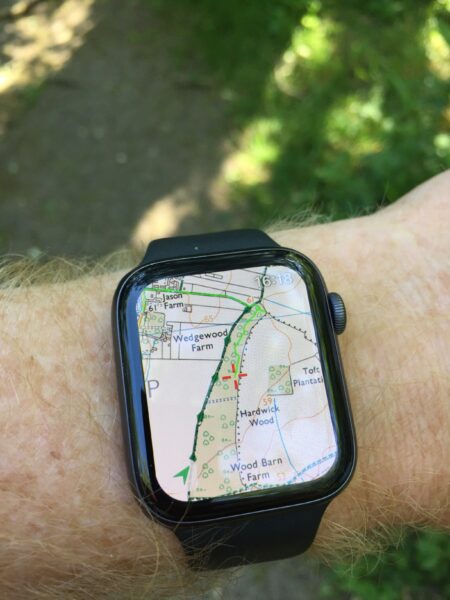 I could have used this in the past, had I discovered it, but it’s also vastly improved by my recent purchase of a Series 4 watch to replace my Series 0, which means that when I raise my arm to look at my watch, things actually appear before my arm gets too tired and has to be lowered again. In fact, while testing it on this afternoon’s dog walk, it was effectively instantaneous. Where does this footpath to the right go? Let me just glance at my wrist – ah, OK. You can scroll around, zoom in and out etc, but most of the time, all I needed was a quick glance: no unlocking, no soggy touchscreen. (It also looks amazing, but I think that’s mostly because of another recent purchase: a new and expensive pair of spectacles!)

All of which makes me wonder whether, despite being at the opposite extreme in terms of screen size, I may after a decade have found an even better map viewer, at least in certain circumstances, than the iPad!

Good to see you still have orange hair on your arm:
when I forget to shave, it comes out grey!

If it’s running on my phone, I can simply raise my wrist to see where I am.

Isn’t this a bit annoying if you actually wanted to know the time?

Time is such a secondary function for watches now 🙂 But there is an option to leave space at the top of the screen for the time.