I’ve talked before about some of the nice statistics the Financial Times is gathering about the epidemic, and the clear dispassionate way it’s presenting them.

Their latest tool gets more interactive, and lets you compare, in various ways, how your country is doing against others. I like three things about this in particular.

So you can do your own investigation and see that by some measures, your country is doing fairly well (cumulative cases compared to Spain): 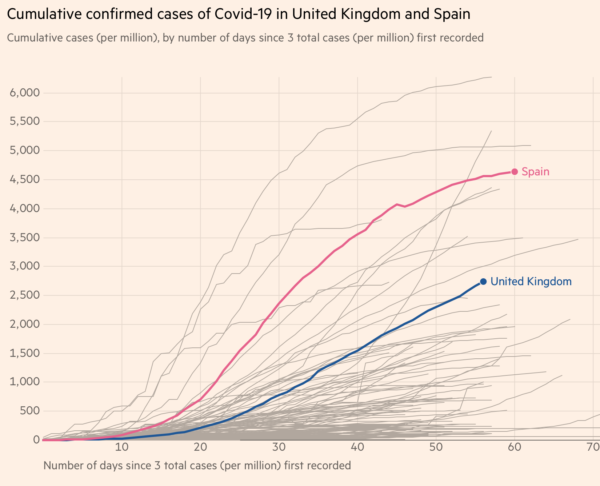 And by other measures not so well (daily new cases compared to France): 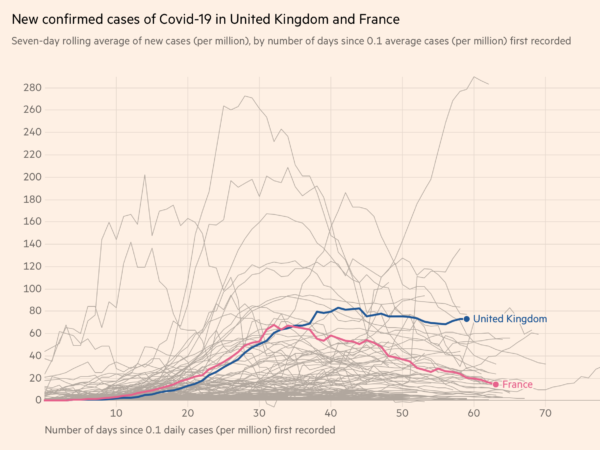 You don’t have to switch countries to get different viewpoints, though. Suppose you wanted to make the case that the UK and France were pretty much neck-and-neck, you’d plot the absolute cumulative deaths on a log scale: 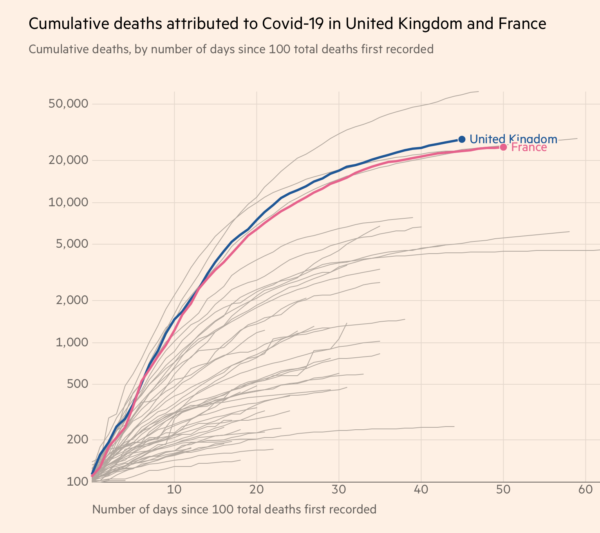 (Neither of these capture the fact that France has less than half the population density of the UK, but they’re still useful illustrations.)

Let’s display the same data about the UK and Italy in two different ways.

Do you want to make the UK (or its government, healthcare system, population, whatever) look reasonably good? Plot the cumulative cases. 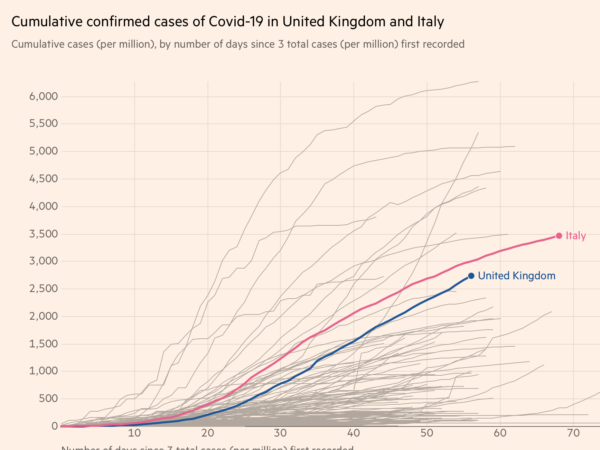 Does your editorial policy or personal preference dictate that you want to make the UK government, healthcare system or population look bad? Then plot the same data as a daily rate (roughly the gradient of the above graph). 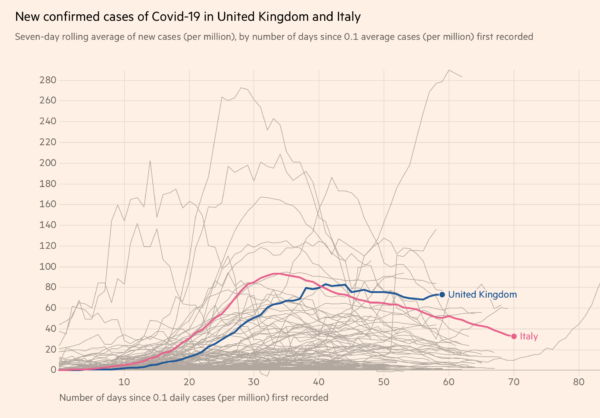 That’s the same data over the same period on the same kind of axes.

All of which illustrates why it’s good to have a tool where you can explore the data yourself. As long as you really do explore it and don’t just stop when you get the conclusion you want!

In the above examples, the images are links to larger versions: the links in the text take to the FT site where you can experiment to your heart’s content.

Today I was applying, on behalf of my department at the University of Cambridge, for an educational discount on some software.

So I sent them this: 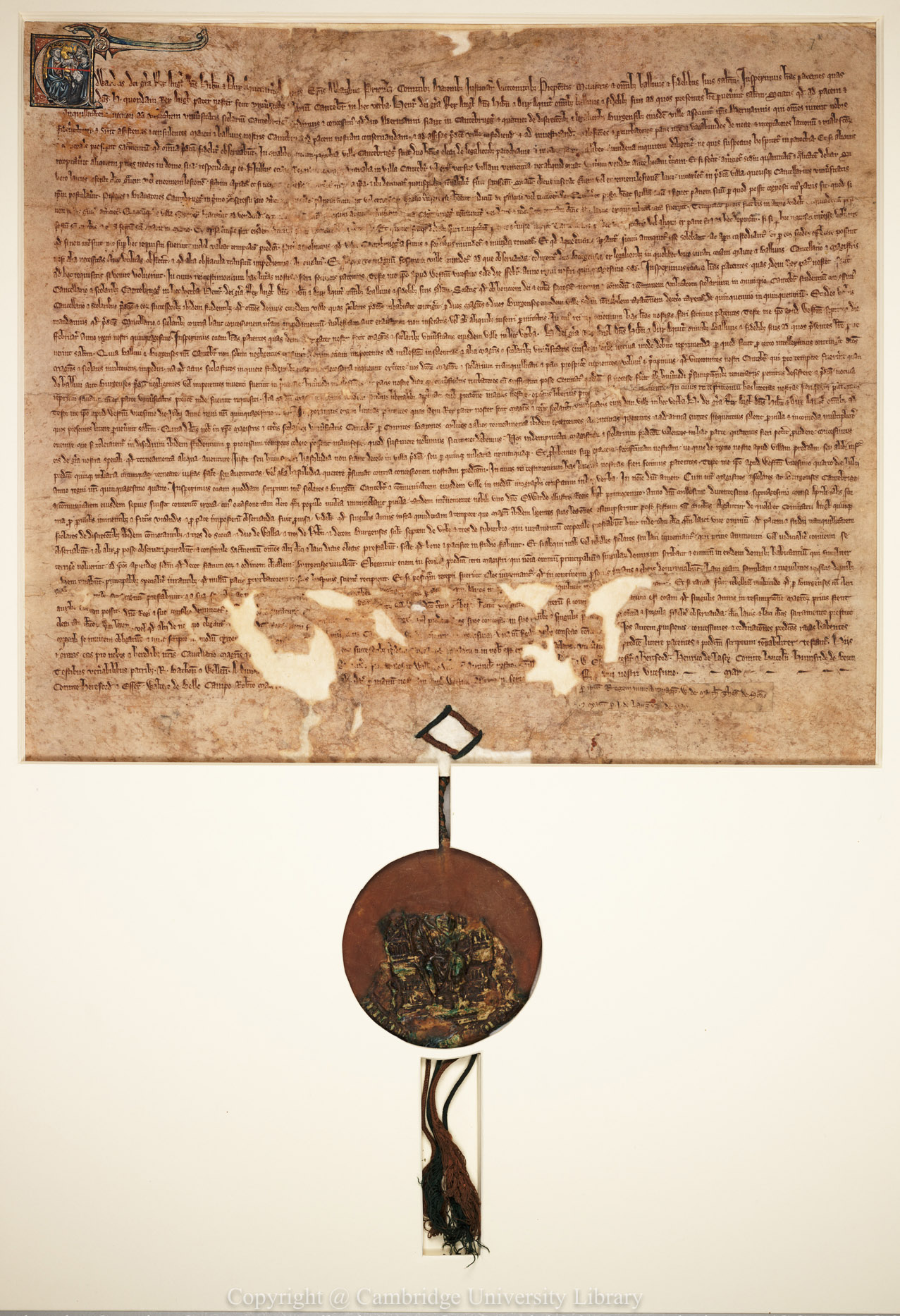 It is, apparently — for I must confess I didn’t read it carefully — “a charter in the form of letters patent of inspeximus and confirmation by Edward I to the Chancellor and Masters of the University of Cambridge confirming the privileges of the University granted by Henry III, and an agreement between the Scholars and Burgesses for the punishment of disturbers of the peace by a representative group from both sides”. It dates from 6 Feb 1291, and it’s worth looking at it on the University Library’s web site, where you can zoom right in and see the lovely illustration in the top-left corner.

Anyway, the company granted us the academic discount. Probably wise. You wouldn’t want to upset Edward I. Remember what he did to the Scots.