Academia ain’t what it used to be

Malcolm Gaskill has a poignant, observant and very nicely-written piece in the London Review of Books, entitled “On Leaving Academia”.

In​ May, I gave up my academic career after 27 years. A voluntary severance scheme had been announced in December, and I dithered about it until the pandemic enforced focus on a fuzzy dilemma. Already far from the sunlit uplands, universities would now, it seemed, descend into a dark tunnel. I swallowed hard, expressed an interest, hesitated, and then declared my intention to leave…

There are many parts of this that resonate with my experience, though my involvement with academia in recent years has been much shallower than his. I am also intrigued about the ways in which Covid is suddenly shaking up the methods of teaching that have been the norm for decades, if not centuries. Some good things will come out of this, I’m sure. But I also share much of his yearning for the past.

Three responses went through my brain in quick succession:

The first was that the ongoing success of universities now will depend chiefly on hiring lots of young, eager academics, primarily because they don’t know how good things used to be.

The second was that the bureaucrats who oversee universities should note one important thing here: this is not the dusty nostalgia of an old gent in his seventies coming to the end of his career. Gaskill is 53.

But my final thought was of a little phrase in a book of poetry and trivia from my childhood. It simply had the title “The Good Old Days”:

These ARE the Good Old Days. Just wait and see.

Thanks to John for the link.

Grant me the wisdom

I like this tweet from Elizabeth Ayer this morning. Definitely a good recipe for preserving your sanity in the modern world.

God give me the strength to ignore the news that won’t change anyone’s mind, the energy to engage with the news that might, and the wisdom to know the difference.

I’m a middle-aged computer geek, but my iPhone is too old to run the NHS Track & Trace app. I think this is a limitation of the Bluetooth hardware, but my phone also can’t run a recent-enough version of the operating system.

This isn’t a criticism of the app; you need the right hardware to do something like this. But it makes me wonder about the proportion of the population that will actually be able to run it. Perhaps middle-aged computer geeks like me are actually the most likely to have elderly phones? I wonder whether anyone has done a graphic, plotting the age of users against the age of their smartphones? Probably a kind of 3D histogram?

On the one hand, younger users are probably more likely to be swayed by a desire for the latest gadget and by competition with their peers. But older users are, I guess, more likely to have the disposable income to upgrade. Mmm.

And now, of course, we have some interesting extra dimensions. The effectiveness of the app is highly dependent on its market penetration, and that penetration in different age-groups is going to be constrained by this distribution.

There are lots of lovely opportunities for research, here, and for inventive data visualisation. Anyone got any funding available?

One thing is clear, though. The more of a social animal you are, of whatever age group, the more important it is that you run this. (That’s a serious point, so no snarky comments, please, about whether middle-aged computer geeks often fall into that category.)

Now, here’s a last thought. I have been considering that it may finally be approaching the time when I do upgrade my phone. But I’m likely to wait until Apple announces their next models, presumably sometime between now and Christmas. (This isn’t because I want the latest one, necessarily, but because the current top model will probably be demoted to a cheaper price bracket when its position is usurped.) I imagine many others may be in the same position, and large numbers of us will become track-and-traceable only after that point.

Given that this same technology is being used around the world, how many lives might be dependent on the timing of the next Apple and Samsung product announcements?

I promise to pay the car park attendant on demand… 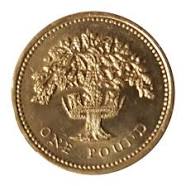 Excuse me… were you invited to this party?

Today we’re heading for Cornwall. Normally, that would be a major undertaking, but fortunately, we can see it from where we’re staying.

It’s just over there: 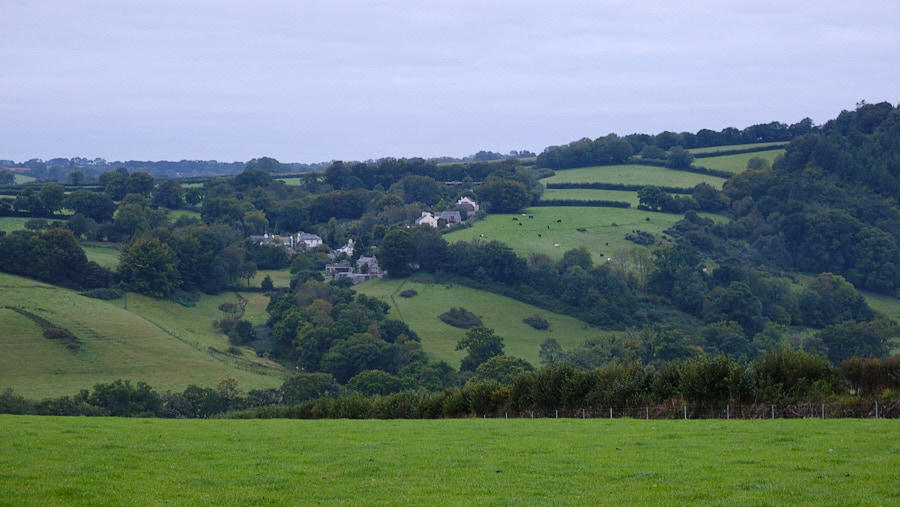 We’re staying in a throughly delightful B&B in Devon, on a working farm. This is the view from the front door: 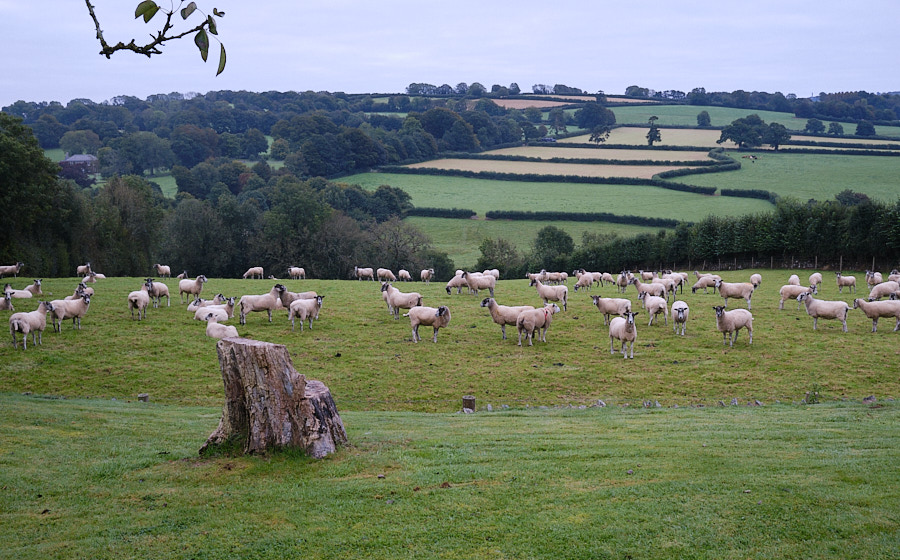 Rose was greeted by the welcoming committee in the car park. 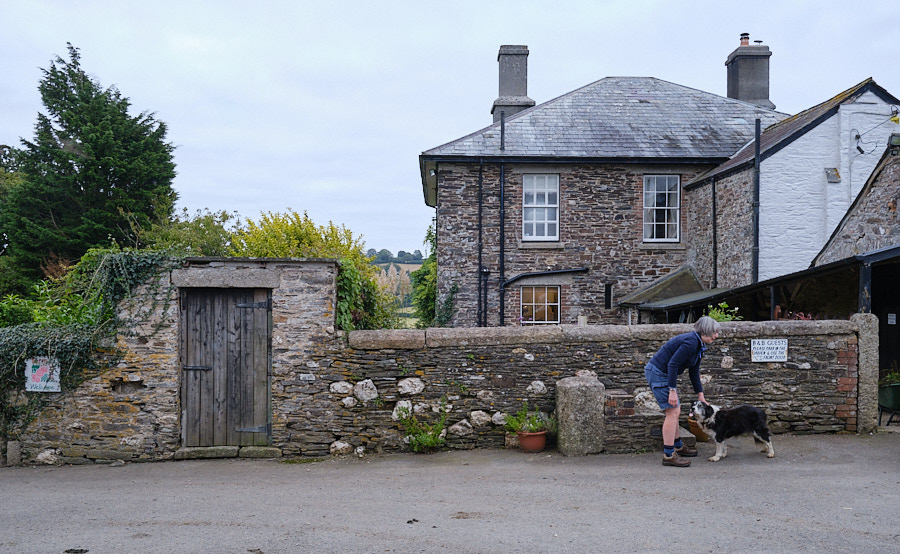 We drove down here in our little electric car. We’ve had it now for nearly five years, and have clocked up 30,000 miles, which I realise means we’ve put about eight megawatt-hours through its battery! That sounds like quite a lot, so I should point out that it represents total fuel costs to us of about £20 per month, and in our case that fuel was almost entirely from renewable sources; mostly hydroelectric, with a bit of solar and wind. So for the last five years, we’ve been driving around powered by sun, wind and rain.

One thing that helps with the efficiency is keeping your tyres pumped up to the correct pressure. I carefully did that a couple of days ago before setting off. But I couldn’t help noticing this morning that our very genial host, Rob, was doing the same, but he has a rather more powerful tyre pump than I have! 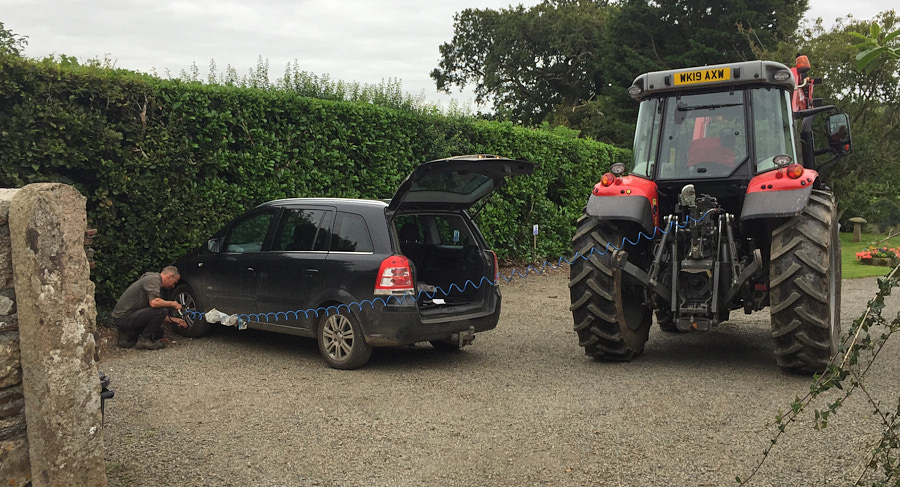