I’m a big fan of my Apple AirTags. I have a few of them now, and they’ve been jolly useful on several occasions, enabling me to find things quickly that would otherwise have involved more time and stress, or to notice that something has been left behind and so recover it far sooner than would otherwise have been possible.

They’re very cunning devices. Tilly even has one on her collar now! 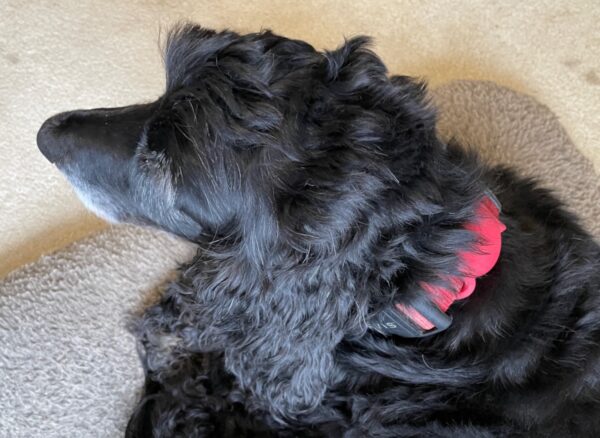 For those not familiar with the underlying technology, the general challenge with locating devices in the past has been that it typically involves two components: a GPS receiver (to find out where the item is), and a connection to the mobile phone network (to report that location to whomever may be looking for it). Both of these need significant battery power, so trackers have been bulky, required frequent recharging, and the phone connection generally implied a subscription. In the past, therefore, tracking has generally been reserved for valuable things which can carry big batteries, like cars, or like smartphones which happen already to have the necessary functions built-in and get recharged every night.

Since I have been known, just occasionally, to be a little absent-minded, I have made extensive use of Apple’s ‘Find my…’ system over the years to locate iPhones, iPads, even spouses. And before you scoff, I should mention that my knowledge of how to use it also once won me an enthusiastic embrace in the middle of a field from a rather beautiful young woman who was a complete stranger to me. So there! But that’s a story for another day…

Anyway, the AirTags have neither a GPS nor a big battery, and yet still manage to transmit their location back to you remarkably effectively in most circumstances. How do they do it? Well, they can be detected by any passing iPhone, and there are a billion of those moving around the world, so there’s a surprisingly good chance that if a human passes close to your lost bunch of keys, you’ll get to know about its location fairly soon.

The AirTags are also, I believe, the first large-scale deployment of UWB location technology, the details of which are beyond the scope of this post, but it basically means that if you have a recent iPhone, when you get really close to the Tag, you can be guided to it using a compass-needle-type display, in a way that would not be possible with something like Bluetooth alone. You can find out not just that your wallet is in this room, but that it’s behind this sofa cushion.

Still, my use of AirTags has been very practical and prosaic. Others have had more fun, and a YouTuber calling himself AirtagAlex has done some wonderful experiments over the last few months of mailing AirTags to different parts of the world and seeing the routes they took to reach their destination.

I rather liked his latest video, though, which explores one of those questions you might never have thought of asking in the past: what actually happens if you get on a plane and leave something in the pocket of the seat in front of you?

Fun, and similar to this video I saw a while ago: https://www.youtube.com/watch?v=C72_8IGhR8Q