Yesterday, I lost my glasses. This is perfectly normal, and happens on a regular basis. One of my roles in life is to provide the opticians of South Cambridgeshire with a healthy and predictable revenue stream. What was much less typical about yesterday, though, was that I found them again!

Despite some of my recent posts, this was nothing to do with Apple AirTags, because I don’t currently have those attached to my spectacles. (I thought I looked rather dashing with them dangling about the ears, and many of the chaps at the Drones agreed, but I noticed that Jeeves had become particularly frosty recently, and found himself unable to extract me from a dashed sticky situation involving Madeline Bassett… but I digress. No AirTags currently adorn your correspondent’s brow.)

Anyway, yesterday afternoon, I was out walking Tilly, in a gentle rain, and I decided to take a photo of the view across the field in the mist. “This shot would be easier to compose”, I thought, “if I were wearing my glasses”, and I reached into the pocket of my coat… to discover that they weren’t there.

“Bother!”, said I, contemplating the last couple of miles that we had walked, the branches I had ducked under and the ditches I had leaped, any of which might be clues to their likely location. But then I remembered I’d received a phone call just a few hundred meters back, and had been able to read the name of the caller with ease, so I must have been wearing them then. I started to retrace my steps, gazing without much hope at the long wet grass, and thinking how easy this would have been if it weren’t for Jeeves.

After a couple of further passes over the relevant stretch, in the fading light, with a bemused (but useless) scent-hound trotting behind, I was about to give up hope, when I suddenly remembered: Hang on a minute! I had taken one other photo! It was after the call, but before I had noticed the glasses were missing. Surely I must have been wearing them then, and removed them afterwards because of the raindrops gathering on them. I bet I dropped the glasses at the location of the photo! 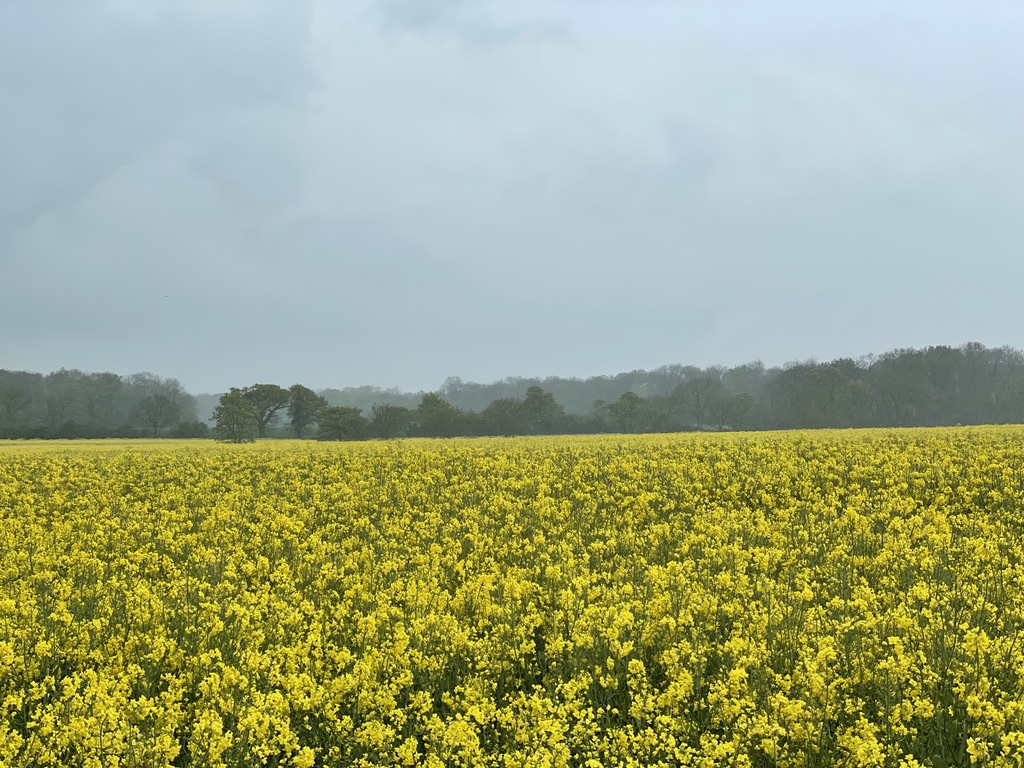 The problem was that it hadn’t really been a great photo; not many distinguishing features in the view. I was along one side of a big field, on a wide path, and I had paid little attention to my surroundings. Looking back at it now, I realise that I could probably have got those two rows of distant trees in the same relative alignment and located my former position quite accurately, but I was trying to view it on a small and decidedly damp screen… without my glasses. I was having enough fun just trying to tap on the right photo.

However, of course, all my photos are geotagged. I spent a while trying to work out how to see its location in the Photos app: not easy, even when you can read the text and make out the icons. (Hint: you need to swipe up from the bottom.) But eventually I found it. Not entirely helpful for precise location.

By tapping random blurry things, I managed to get into satellite view, and that was much better:

However, you have to remember that, at the time, it looked more like this:

And there are quite a lot of bends in the path with big trees beside them.

The Photos app doesn’t show your current location, only the location of the photo. I switched into Google maps, where I could see the moving blue dot, but the trees and crops looked completely different; the photo had been taken at a different time of year, several years before. Not much help.

I looked down, and there, nestled in a tuft of long grass, were my glasses. I had passed them three times that afternoon since dropping them, as had Tilly, who can track a pheasant at a considerable distance, but takes little notice of her master’s most valuable possessions right under her nose.

“At last!”, said she. “Come on! It’s dinner time.” And we scampered off towards the car.

[…] my glasses and found them again. If you missed that particularly gripping episode, turn back to Location, location, location (or, ‘How technology saved me a few hundred quid yesterday’) and then you’ll understand the background […]