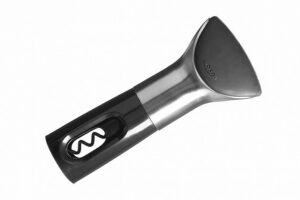 This is a lovely essay by Kelly Pendergast, brought to my attention by Andrew Curry on his Just Two Things newsletter.

It’s beautifully written and an enjoyable read, which is quite an achievement when it’s talking about consumerism, supply chains and waste management. Don’t let that put you off. Lots of good stuff there.

She talks about the admirable Oxo corkscrew she was given by a friend.

I suppose I should be happy to own such a perfectly functional piece, no muss, no fuss, no danger of injury, but what can I say? It’s ugly and I don’t like it.

You may not be surprised to hear that it was a gift. Life would be simpler if it had never entered the house, but between the gift-ness and its unfortunate excellence at performing its single task, I haven’t been able to get rid of it. Marcel Mauss, in his inquiry into the anthropology of the gift, asks “What power resides in the object given that causes its recipient to pay it back?” The gift corkscrew is freighted with a psychic weight that can’t be directly repaid, but can’t be forgotten.

She includes a memorable quote from Robin Nagle, anthropologist of material cultures and anthropologist-in-residence at the New York Department of Sanitation. (Now, that’s a job title to conjure with!)

“Every single thing you see is future trash.”

She talks about the other kinds of emotional weight we attach to objects, (or, sometimes, don’t, when we should do), and a feeling of guilt about being part of the flow of manufactured items on the way from raw materials to the grave…

Anyway, as Andrew Curry said, it’s hard to do it justice in excerpts; just read and enjoy.

On that topic, having referred to my late friend Martin King a couple of days ago, I will do so again today.

I remember that we were buying furniture for one of our companies’ offices, and he was spending some time seeking out used, good-quality, basic tables and chairs, which also seemed rather expensive to me. I probably said something about it being easier and cheaper to get them from Ikea.

“Yes”, said Martin (who, despite his considerable wealth, generally shunned anything that looked like luxury), “but we buy quality things because we don’t want to be responsible for creating rubbish in the world.”

That was a phrase that stuck with me.

If the company goes bust you can re-sell the good quality second hand furniture to the next similarly minded start up.

Solarflare bought some splendid second-hand desks (ex-Marconi I think) from Silverman. They went back 15 years later, when Xilinx splashed the cash and bought us nice white desks. I wonder how long those will last?