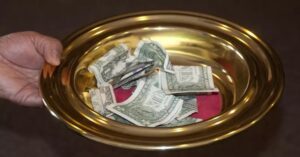 Many religions, especially those with Mosaic/Abrahamic connections, embrace the concept of ‘tithing’: giving one tenth of your income to the church. Originally, of course, this referred primarily to agricultural produce; in more recent years it tends to focus on Standing Orders and Gift Aid. Jesus himself apparently said little or nothing about it, which has allowed different groups of his followers to put differing degrees of emphasis, or compulsion, on on the concept since. But it is, of course, generally regarded by church leaders as desirable, and in my youth, sermons pointing out the biblical distinction between ‘tithes and offerings’ were not uncommon — the former being expected and, in effect, already belonging to God; the additional voluntary contributions constituting virtue (as long as both were done in secret).

Over coffee, after one of these sermons, I sympathised with the preacher. How obvious it was, I said, that very few people took these biblical directives to heart. He made some remark about how he was fortunate to have a generous congregation, and I fear I may have emitted something like a snort as I looked around at the gathered multitudes. I was very fond of them too, and many of them were very generous people, but I pointed out the mathematics…

In the Anglican church, for example, if people took tithing seriously, then every nine parishioners could support one vicar, who would then have the same average standard of living as his flock. (That got his attention!) You would need ten in your congregation if the vicar tithed too (which I guess would allow ten vicars to support one bishop, and so on).

OK, and you have to maintain the church buildings, do some good works, etc. So perhaps you need a congregation of about 15 people per priest for the church and clergy to lead a comfortable life. (That’s assuming your church doesn’t have any other income from land, bequests, indulgences or whatever…)

In the 35 or so years since that conversation, church attendance has declined so rapidly that many parishes will be doing this kind of maths for themselves. The average C of E congregation is something like 30-40 at present. But back then, though, I fear I may have left him contemplating his congregation of around 150 a bit less favourably than when he started his mug of coffee.

I spent my youth questioning just about everything. We were taught that “holy water” was special, so must be treated with respect. I asked, if I were to dilute it a little, would it still be holy? A reluctant “yes” was the answer. So if I poured that into my bath water, would that still be holy? Again, thinking I was about to suggest bathing in holy water, another reluctant “yes”. So now, if I pull the plug out, is the sewer, indeed the ocean, also more holy? Stumped silence.

Holiness can be preserved in interesting ways, though, apparently. A friend was ordained in the CofE many years ago, when, as a woman, she was allowed to conduct communion services but not actually say the magic words that consecrated the bread and wine: a male colleague had to do that for her.

One night, called unexpectedly to a hospital bedside by someone in their last hours, she discovered she had no consecrated bread she could take and the vicar was away. She called another female clergy friend, who said, “Oh, don’t worry! I keep some in the freezer. I’ll thaw some in the microwave and you can pick it up en route…”!

From a Christian standpoint, I think that it’s important to also account for the fact that a congregation is ideally going to reflect all ages and stages of life: with the gospel speaking to all of these, and the church being a community drawn from (and supporting each other) across all these differences.

In that context, the income of an individual congregant (e.g. a child, or a homemaking spouse) may be low (or non-existent), and their day-to-day welfare contingent on them being part of a larger familial unit. Though obviously not every member of a church will be part of family with five children (I count myself as an exception!), were one to accept a 2-4x multiplier effect on average, then your calculation becomes 30-60 people to sustain a congregation, which in my experience is the minimal size of long-term self-sustaining churches.

(Entrepreneurial new churches starting from a small number of people are often supported by other larger churches, and unfortunately churches whose congregations are diminishing in size often collapse when they dip beneath this level – at least in non-conformist circles when there is no larger ecclesiastical support for keeping such churches going.)

With that in mind, your preacher may not need to have been as despondent as you suggest – but the reality of the very hard decisions the Anglican church will need to take about its support for small congregations in the wake of the present pandemic is nonetheless undiminished.

Andrew, good point: I should at least have talked about adult congregation members! Or perhaps counted the number of families required to sustain a clergyman and his (or her) family…

Many moons ago when I was a new-ish Consultant Microbiologist at Addenbrooke’s, I was phoned by an Infection Control sister for advice about an Eastern European family who had been scattering holy water from an ancient, cloudy bottle around the bed of their critically ill, pious elderly relative. “Surely this isn’t safe?”.
Indeed, a quick flick through Index Medicus confirmed holy waters frequently contained aquatic pathogens that had infected patients. I saw a way forward, though, that might support the family’s morale while protecting their relative, and I called one of the hospital chaplains and asked if the beneficial effects of the liquid (which I think had been blessed at some site of pilgrimage) would survive passage through our laboratory autoclave. He confirmed they would, and went down to ICU to discuss this with the family.
One of my more artistic colleagues produced a cartoon of this unusual laboratory service (when we’re back home at the weekend I’ll see if I can find it among my papers 🤓).

Jesus may have said little about tithing but he talked more about money than he did about prayer.

Your calculations also need to consider tax. Some think that this fulfils the same role as the original concept of tithing. Others use the post-tax figure as the “income” from which 10% is taken. And even those that give 10% of pre-tax income do not necessarily give all of that to the local church.

There is also the saying that “the last part of a Christian to be converted is their wallet” which emphasises that not all those who attend church are Christians, or committed to giving at this level.

And finally a reminder that “All things come from you, O Lord, and of your own do we give you” so this is about how a Christian spends God’s money, not their money 🙂