« Getting 3-Dimensional
Understanding the rules of the business game » 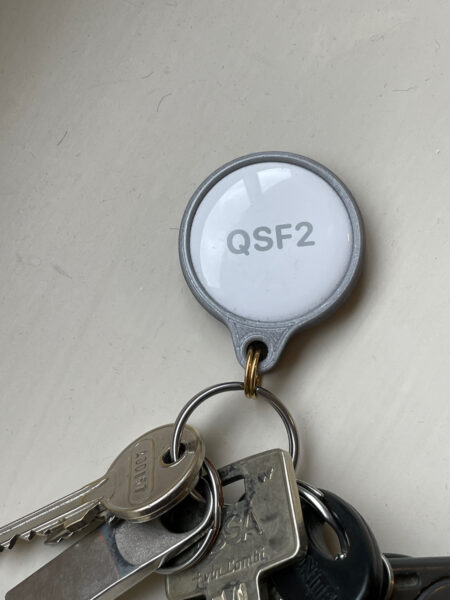 Well, somewhat to my surprise, I found an Apple AirTag to be remarkably useful today! (I bought them because, well, I just like gadgets and these are beautifully-engineered gadgets, but I wasn’t sure how much I’d actually use them.)

This wasn’t anything dramatic: no long-lost pets being recovered from the other side of the county or anything like that. No, we were going out, and I wanted to find my keys. It turned out that, last night, I had used them to unlock the side door before putting some things in the recycling bin, and, perhaps because I had my hands full and my mind elsewhere, had left the keys on the shelf beside the door: not somewhere they would ever normally live. Then a plastic bag had been put in front of them, and they were hidden from view.

So it was no big deal; we would have found them again in a day or two, but the ability to track them down to roughly the right room and make them beep meant that we were out of the door a minute later, with no worries lurking in the back of my mind. It won’t take many such absent-minded moments on my part — and these are distressingly and increasingly frequent! — to make the tags well worth the money.

I’ve tried some of the competing products (TrackR & Tile, both with Android) and I’ve found the Bluetooth LE just too unreliable. If the device doesn’t show up on the app, it’s hard to know whether it’s due to the device being out of range or just not paired correctly. Have you run into that with the AirTag?

Not yet! But in my experience, Bluetooth between two Apple devices is, generally, a more reliable proposition than between two devices from random manufacturers. There’s a thread here that seems to suggest this is the case when compared with the Tile, too.

The bluetooth range on the Airtags isn’t great — indoors, at least, I need to be within a room or two of them, so, being reasonably confident from the app that the tag is at home, I wander from room to room until it locks on. After that, assuming you have an iPhone 11 or 12, it uses UWB for the fine-scale rangefinding, something that previous devices have not been able to do: if they did range-finding at all, it had to be based on Bluetooth signal strength, which is a very poor metric.