As the world moves rapidly in the direction of electric propulsion, there is one big challenge, irrelevant to the majority of car-buyers but a serious concern for a significant subset of us: what are these EVs like when used for towing?

This has been more in my mind recently as we have just purchased a small boat — more on that later, once we’ve finished sanding and varnishing! But when you add up the people who tow caravans, horses, motorbikes, classic cars, trailer-tents, ride-on lawn-mowers etc, there’s quite a population for whom this is a real issue.

I haven’t yet done much towing, but one of the key factors that made us choose the Tesla Model 3 at our last car-change was the fact that it could take both a roof-rack and a tow bar; something that, at the time, was really quite rare on EVs.

There are, of course, two key questions most people want to ask: how much can a given EV tow, and how far can it tow it?

EVs ought, in general, to have very good towing capacities because of their enormous torque, and the fact that they’re quite heavy. (Experts suggest that, in general, it’s best only to tow things up to 85% of the car’s weight, and the EV batteries give you a bit more leeway!) EVs also, of course, lack things like a clutch and gearbox, components which, in days gone by, tended to suffer a bit from towing.

But towing hasn’t, thus far, been a priority for most EV manufacturers, which means that these powerful, heavy cars are often not actually built with it in mind, and so are not rated to tow loads as substantial as one might expect. (There are also probably challenges in getting things like the regenerative braking right for both braked and unbraked trailers.) My Model 3, for example, weighs quite a bit more than a VW Golf and has infinitely more power, yet its rated towing capacity of 1000kg seems a bit weedy compared to the Golf’s 1500kg or so. The Model Y, just starting to make its way to these shores, has a more respectable 1600kg rating, and the Hyundai Ioniq 5, which has been getting a lot of positive reviews recently, has the same.

An enterprising campsite owner, Chris Scott, has put together a useful list showing the towing capacities of most current EVs. While none of those available at present in the UK will compete with a Land Rover, there are nonetheless quite a few to choose from if you want to tow most normal loads, and if you have the (rather significant) budget for a Tesla Model X, you can pull a similarly significant weight!

Yes, as always, this is the elephant in the trailer.

Here’s a quick rule of thumb when you hang something on your tow bar: take the real-world range of an EV, and halve it. That, of course, is a wild generalisation, but it’s often quoted, and tied in with my first experience towing a trailer on the Model 3.

“What?!”, you say. “You’ve been trying to tell me that EVs are good when they can only do 300 miles compared to my car’s 400! And now you stick a poxy little trailer on the back and tell me it’ll only do 150?” This number doesn’t phase me; before the Tesla I was driving an EV which had a range of about 70 miles without a trailer, and we went all over the country in it. But yes, that’s right. You’ll probably have to stop every two or three hours. But you should really do this for safety whenever you’re driving, and just how big is your bladder anyway?

The thing is that EVs are often very dependent on their aerodynamics for their range, especially Teslas, which are normally exceedingly slippery. Spoil the airflow with a big roofbox or a chunky trailer and it will have a very significant impact.

But here’s the important thing: this is nothing to do with the power source. If you had the same car with the same aerodynamics but with a petrol engine, the drag would still change to the same degree and the effect on the range would be similarly drastic. You just don’t think about it as much with traditional cars: in EVs, it’s typically higher up in your consciousness. Few people really check the range of their petrol car when towing for several hours on the motorway.

Having said all of that, my experience in towing our little boat from her former home in Dorset to Cambridge, 165 miles away, was quite encouraging. First, it towed beautifully; the gear-less acceleration and single-pedal driving made for a very nice experience. And secondly, the loss of range, though significant, wasn’t as bad as I’d feared.

Tesla likes to use measure consumption in watt-hours per mile (analogous to the European litres-per-100km), so bigger numbers mean more energy used. By setting the cruise control to 60mph — the maximum towing speed in the UK — my average consumption was 400 Wh/mile, compared to my normal 285 Wh/mile or so — and, because it was fairly late at night, I was able to maintain that speed most of the way home. If I’d had to go slower, the consumption would have been lower.

Or, to use the miles-per-gallon analogy adopted by most other manufacturers, I went from about 3.5 miles/kWh to about 2.5 miles/kWh. A big difference, yes, but much better than half. That would give me a real range of around 180 miles. If I had started the three-and-a-half-hour journey with a full battery, I could have made it home without having to stop for a charge. And this was night-time in February, with the associated winter inefficiencies of lower battery temperatures, headlights, and needing to keep the driver cozy and warm while he listened to his audiobooks… 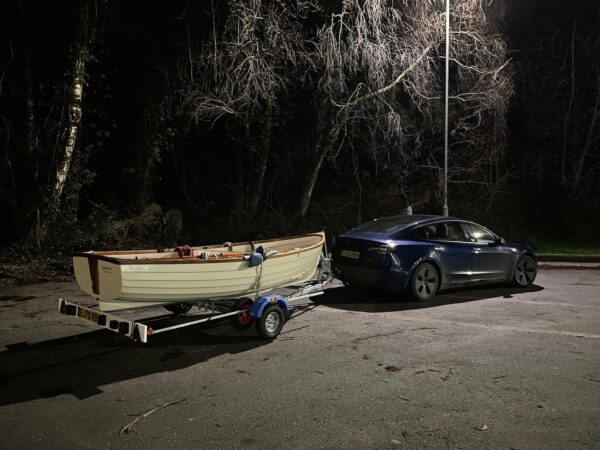 For those of us who remember the pioneering early days of EVs — i.e. just a few years ago — today’s charging stations can be a source of wonder. If you manage to park a modern car with a nearly empty battery at a new super-rapid charger, then the rate at which you top up can be astonishing.

Once again, Tesla owners are a bit spoiled here: my old BMW would charge at a maximum rate of 50kW, rapidly dropping off as it filled up its little battery. That meant that the peak rate got you about 3 miles for every minute you spent charging, and you had plenty of time to take the dog for a stroll or even have a quick meal before driving for the next hour.

The newer Tesla superchargers can manage up to 250kW, if your battery is warm and empty, and because of the size of the battery and some clever management, can maintain a high rate of charge for much longer. Popping to the loo and then picking up a coffee or a quick snack is time enough to add vast amounts of charge before you set off again.

But, in either case, this does take longer than filling up with dinosaur juice, and the result is that most charging stations, at least in the UK, are designed more like a car-park than like a ‘drive-thru’. There are some notable exceptions, like the Electric Forecourt at Braintree, which I visited when it first opened a little over a year ago. If you haven’t seen it, here’s a section from my video at the time: 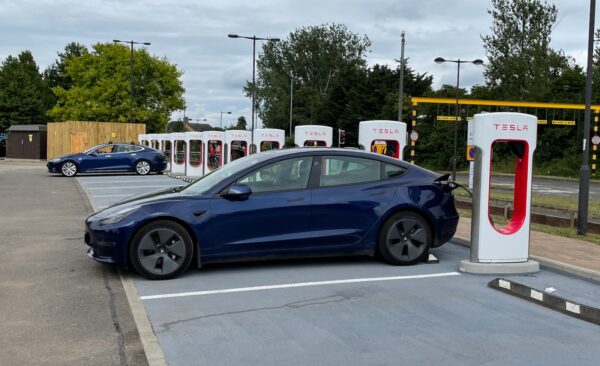 This is clearly not ideal if you’re towing. For a light trailer like my boat, it’s the work of a moment to unhitch it and put it in a nearby parking space, but it would be more challenging with a bigger load.

So can I make two appeals?

The first is to the installers of charging stations — you lovely people — to consider including one or two stations suitable for people with caravans attached? And to put a sign asking those who don’t need them to make use of the other ones first?

And the second is to the creators of charging-point maps, to include data about whether a charging station is trailer-friendly, and to allow searching on that basis. It would be fabulous to be able to plot your course across the country, stopping to charge only at places where you didn’t need to unhitch.

In the meantime, occasionally you can find charming and quiet charging points, like this one near Winchester, where there’s plenty of space for eccentric parking arrangements! 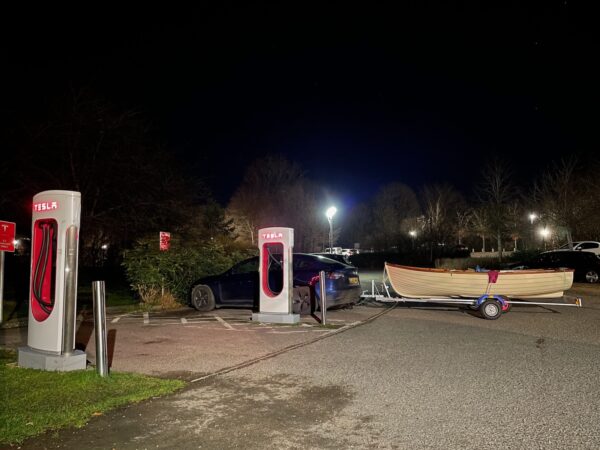 P.S. If anyone remembers my Digital Towbar suggestion from a few years ago, it looks as if Airstream have been playing with a similar idea. That’s probably the future!

[…] wrote a couple of months ago about my early experiences of towing with an electric car. A couple of quick updates, now that I’ve done a bit more towing of my little boat with an […]