« In case you were wondering…
Televisual errata and nostalgia »

Griff Rhys Jones, in one of his books, talks about being given Coca Cola as a child when visiting the rather grand neighbours down the road, an Australian doctor and his wife:

“Real Coca-Cola was something we never saw anywhere else.  Not simply because it was an expensive luxury, but because, like American comic books and ITV, it was something inherently corrupting, although not apparently to Australians.”

This made me laugh out loud.  We also grew up with the curse of fake Coke, which was even worse than the real stuff, and with the same general understanding about comics and ITV. (I realise now, of course, that my mother was entirely correct on these points!)

For my foreign readers, ITV was our first commercial TV channel, and, though it started broadcasting in 1955, that was only in London.  It took a while to reach us, partly because we lived 30+ miles away from the capital, and partly because many early television sets only had one or two channel buttons on them, to let you switch between BBC1 and BBC2.   ITV had a stigma because it was commercial – supported by advertising – and we knew that the very best firms, like John Lewis, didn’t need pay for advertising because their products were good enough without it.

It wasn’t just us, though: this feeling was widespread.  A couple of years ago I heard somebody on the radio talking about his working-class childhood in a small terraced house in an industrial town.  He described how, if they were watching ITV when somebody rang the doorbell, they would switch to BBC2 before answering the door to avoid potential embarrassment.

Cartoons and comics were similar.  We weren’t allowed comic books, in general, being encouraged to read proper things instead, so the dubious and unsociable activities of characters like Dennis the Menace were things we only glimpsed in other kids’ comics at school.  And, for us as for Griff, cartoons and comics were particularly suspect if they had come from the other side of the Atlantic (unless they had first been vetted by the BBC).

All of this was very right and proper and I have absolutely no regrets about it.  But it does mean that, having married an American wife, I’m now discovering some Christmas children’s classics that had not previously come my way.  Even though we (thankfully) have no children ourselves, if you can’t re-live your childhood, or your spouse’s childhood, at Christmas, when can you?

How the Grinch Stole Christmas (1966) is one I can frankly live without. The attempt to capture a Christmas spirit while ruthlessly expunging any mention of its religious origins leaves me cold.  A Charlie Brown Christmas (1965) is rather better, though I do think Schulz is better in print than on film.

But, to my surprise, I find I rather enjoy Rudolph the Red-Nosed Reindeer (1964), the stop-motion animation that has been a standard part of Christmas for millions of households for more than half a century, but which I hadn’t seen until fairly recently.  But I discover that its origins were highly commercial. 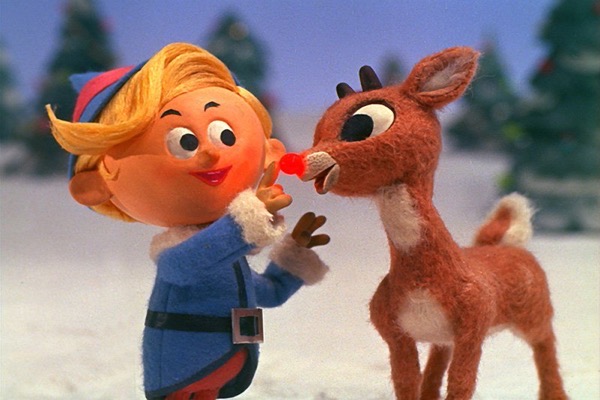 The original story of Rudolph actually dates back to the second world war, when a Chicago department store wanted a short Christmas book to give away to children.  Robert L May, an employee in the advertising department, came up with the story – here’s the original manuscript – and they printed more than two million copies.

A decade later, perhaps not realising what they had created, his employers kindly gave him the rights to the story.  May’s brother-in-law, Johnny Marks, was a songwriter, and May talked him into writing a song based around it… with the result was that May and his family, previously in serious financial difficulties, were able to live very comfortably for the rest of his life and beyond.

The enormously-expensive animation was funded by General Electric, who also produced four advertisments for their houshold appliances featuring characters from Rudolph.   An interesting bit of trivia is that, a couple of years before, GE had also invented the first (red) LEDs, one of which they were able to use to make Rudolph’s nose glow.

For me, part of the fun comes from the little twists.  Hermey, pictured above with Rudolph, is one of Santa’s elves – Wow, what a job, children! – and yet he’s downhearted because his real ambition is to be a dentist.    And the elves come up with a nice song for Santa, but he’s decidedly unimpressed.  “That ridiculous elf-song is driving me crazy!”

In this day and age, I guess kids might not be very impressed with the animation.  But it’s worth considering, while watching it, the vast amount of labour required to create each frame of an hour-long stop-motion animation, using the technology of sixty years ago.

We watched it again a few days ago, though, and one thing jumped out at me as not sounding quite right.  The young reindeer are referred to as fawns… and Rudolph will grow up to be a fine buck.  I went and did some reading and found out that my concerns were valid, and learned a few other things about reindeer too.

Now, since Christmas cards generally show reindeer with a fine set of antlers at Christmas-time, you could probably use the above to win a bet at the pub.

“Will you buy me a pint if I convince you that Santa’s sleigh is actually towed by cows?”

For more background on ‘Rudolph’, see this article from the Smithsonian Magazine, and this piece from NPR.

Here’s another fun fact: May was Jewish and wrote the book thinking about his daughter and not fitting in : https://www.cbc.ca/documentarychannel/features/the-real-story-behind-rudolph-the-red-nosed-reindeer

There may have been two buttons on the tv, but the second wasn’t for BBC2 – it only started in 1964

Ah, well, we didn’t get a TV until the early 70s, but I seem to remember that the first one couldn’t receive ITV. It would have been a second-hand set; we couldn’t have afforded a new one. Whether the limitation on ours was because the tuner was fixed to BBC frequencies, or because the ITV broadcasts didn’t reach us then, I couldn’t say!

The other thing with BBC2 was that it started with 625 lines rather than the old 405 line system the BBC started with. There’s a nice timeline at https://blog.scienceandmediamuseum.org.uk/history-of-british-television-timeline/

Ah, yes, now I think of it, our earliest TV couldn’t receive BBC2 either and that would have been the reason. BBC2 was also available in colour, but it was some years before we had a set that could do that!

Yes, but ITV was London-only initially, and I don’t think it got to us very fast, whereas BBC2 was pretty much national.

However, I wasn’t born until 67 and my memories of my early years are almost certainly flawed!

I love the story about the man who as a child had to switch from ITV to BBC before answering the door. It made me laugh. A lot!