« A phrase to ponder
In case you were wondering… »

Today I did something I never thought I would do. I went and had a look at ‘Truth Social’, Donald Trump’s own social media platform. This was for a reason that I’ll explain in a minute, but it’s interesting to note that the front page looks quite attractive.

“Truth Social is America’s ‘Big Tent’ social media platform that encourages an open, free, and honest global conversation without discriminating on the basis of political ideology”, it says. Mmm. It sounds quite a nice place to be. There’s a big button encouraging you to create an account. “Let’s get started!”, it suggests, offering, “Social Media Without Discrimination”.

Well, I had no intention of creating an account, or even allowing it to create any cookies on my machine, but I was interested to see that, if you came across the site without knowing the background, there wasn’t much on the front page that might put a normal person off.

However, I knew the software they were using and so was able to guess the URLs I could use to see the content without signing up. And it was revealing.

You see, somebody on Twitter had posted, side by side, a Christmas tweet from Joe Biden and a Christmas ‘Truth’, as they call it, from Donald Trump. The contrast was so vivid that I thought the Trump one had to be a spoof, and I wanted to see if I could track them down to check.

But no, it was genuine, so I thought I’d share with you the Christmas messages from these two men: 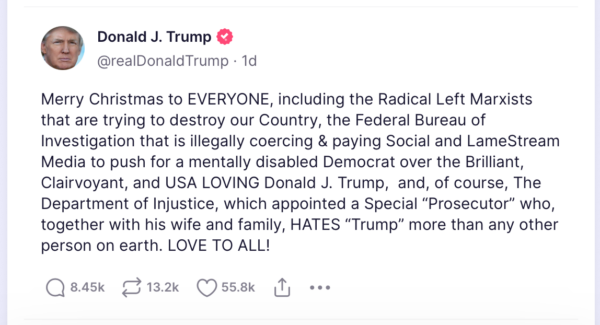 Of course, it would be easy to be selective and deliberately pick unfavourable posts from one side. So, to be fair, I also include the next post from each of them so you can make a more informed decision: 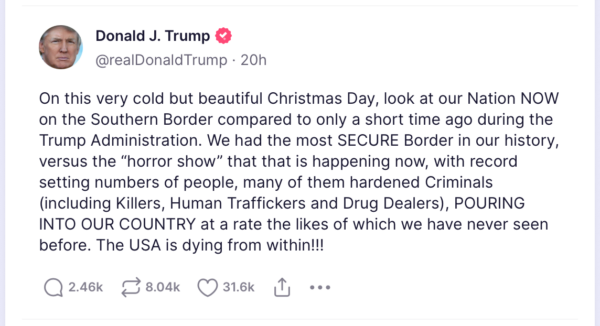 I do not wish to engage in any political debate here, especially not at this time of year, so having presented these Yuletide messages, I will leave you entirely free to come to your own conclusions, at this season of peace and good will to all men.

But I will offer the following benediction to all my readers:

May your festive period, and the coming year for all of us, be filled with one of these philosophies rather more than the other!