Mobile phones, before and after the iPhone.  An image by Josh Heifferich from 2012.

An email today from my American friend Henry Happel included several photos from their visits to us over the years.  Lots of happy memories!

One thing that jumped out at me in a couple of the pictures, though, was that my smartphones were clearly visible.  Not, as might be the case nowadays, because everyone was perpetually gazing at the things, but because I carried them on my belt, or some other convenient external location: 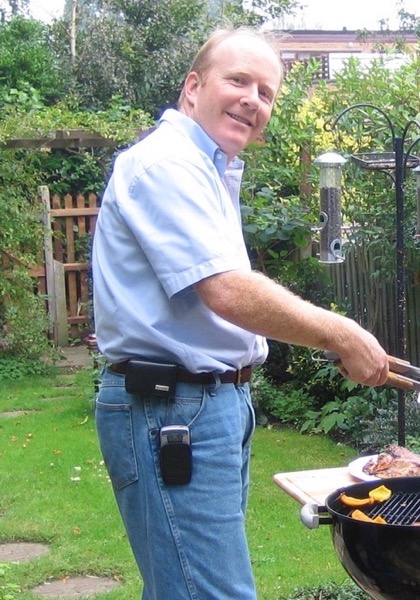 That’s a low-slung Blackberry 7100t, which was an exceedingly fine device.  It had a pleasing phone-like shape because, unlike many other Blackberries of the time which were full-qwerty-keyboard landscape-orientation devices intended only for email and messaging, this was a phone too and had a keyboard half-way between a traditional phone and a qwerty one: 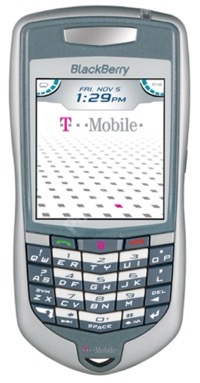 As I recall, it worked exceedingly well and was very nicely made.  External technology changes outdated it pretty quickly, but I still think of it as one of the better gadgets I’ve owned.

Note too, of course, that phones didn’t include a camera back then, so I also have one of those on display on my belt.  It’s probably a Canon Digital IXUS.

And it wasn’t just geeks like me who valued the usefulness of the phone-holster over any compromises in sartorial elegance.  A review of the 7100t at the time talks about how an earlier Blackberry device ‘seems to be finding its way onto the belts of business users around the world.’  Mind you, perhaps most business users concealed it somewhat beneath their jacket…

Anyway, those were the days when phones actually changed significantly from year to year, and shortly afterwards, I could be seen sporting a Nokia E61. 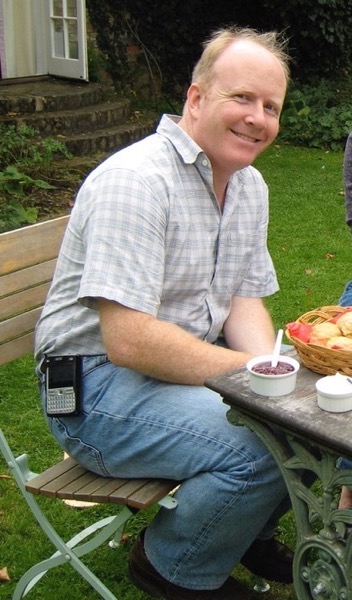 (Amongst other things, this was, I think, the first phone I had which was capable of connecting to WiFi.) 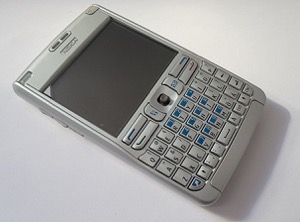 It, too,was generally attached my belt, despite the fact that it was significantly smaller than my current iPhone (except in thickness, where the iPhone wins by a few millimetres).  Were our pockets actually smaller back then?

I guess we hadn’t yet discovered that the main reason for having pockets in the first place is to carry your phone!  We used to need pockets for things like car keys and wallets, but I’m about to head off to the supermarket and my phone will perform both of those functions for me, so my pockets are otherwise pretty much unencumbered.

Still, if you find yourself directing a period drama set between about 2000 and 2007, you might want to add some realism by picking up from eBay a few of these relics of a bygone age… even if they’re only part of the costumes.

I discover that I wrote posts comparing the E61 and the Blackberry back in 2006/7:

I’m an avid reader of your blog, and I thought I’d share a factoid about Blackberries and why they wanted you to wear them on your belt. I heard this from an RF engineer at Blackberry when I was at Waterloo, so though I can’t confirm it, it’s plausible. Apparently the problem they faced with the device was to build a long enough antenna to get good reception. Some bright engineer figured out that if the device was worn on a belt, due to a near-field effect, the person carrying the device acts as an antenna. So, the device came with a belt holster and clip so that users were encouraged to wear the device at mid height, rather than keep it in their pocket! Fiendishly clever. They also found a way to reboot the entire system in about 700ms, so that they could turn most of the device off when it detected a magnetic field (from a magnet on the holster), then reboot as you took the device from the holster to your hand.