Yes, I know all the jokes about “anybody who would marry Quentin…”

This to let you know, gentle reader, that Rose’s book of that name, the third in the Mary Finch series, is officially published tomorrow. We’re having a launch party tonight… However, rumour has it that it’s already available in certain fine bookshops – Waterstones in Cambridge being an example – and you can also find it at the usual online booksellers. Readers in North America will need to order from the UK, or wait until the US edition is published in the autumn…

Links and more information at RoseMelikan.com… Now that’s something I didn’t know… O2 customers in the UK can request to have their iPhone unlocked. At any time. Which means that affordable use while roaming is presumably now possible using a local SIM, though those tend not to give you data as well… still, I’d rather settle for phone capabilities and data via wifi than for no phone at all…

Good stuff. Have filled in the form and will see what happens… it can take a couple of weeks, apparently.

To the north of Cambridge a new housing estate is being built. Well, it was being built, though things seem to have slowed down a bit recently, presumably because the property market is in the doldrums.

I’ve seen some of the houses, and actually been inside one, and they’re not bad, as modern buildings go. But I have to wonder at the intelligence of the developers.

At first, they named the estate ‘Arbury Park’ – a delightful-sounding name unless you happen to ask a local, in which case you’d discover that Arbury, the estate next door, is, shall we say, not deemed to be amongst the more desirable areas of the city.

After building a large number of houses, I presume that they cottoned on to this because some months ago it was renamed ‘Orchard Park’, a ‘mixed use development including 700 prestige homes’. And they’ve managed to convey just some of this prestige in the proud sign that announces the project to passers-by.

I assumed this was a temporary sign. Very many months ago.

Update: Have a look at the comments for some interesting background to the story… and in the afternoon of the day I posted this, I drove past the sign again, to find that it had finally, after many months, been replaced a couple of days before. Which makes it look much more professional, but now, knowing the story, I can’t help but feeling the old one was rather more fun! On Monday I met the guys behind Codility – quite an interesting system designed to help with the recruitment of software developers.

Basically, it lets you set simple programming tasks for developers, which they can perform online and in the language of their or your choice, and then sends you a report of how their code performed against a variety of edge cases, for large datasets, etc. If you’re a programmer, try out the demo – I found it quite fun!

I think there is real value in this in a couple of areas, beyond its obvious use to those hiring developers. Firstly, as a way for teachers of programming to set coursework. And secondly as something that would give recruitment agencies a bit more credibility when they’re bombarding me with spam. I would be much more likely to look at their candidates if I knew they had gone through a preliminary level of filtering, especially if they had completed tasks in more than one programming language. Just around the corner from my house, where the footpath from Cambridge to Grantchester begins, is Skaters’ Meadow. In the 19th century, the meadow would flood, freeze, and people would pay a penny or two to skate around the lamppost in the middle (which you can just see if you click it and look at the larger versions on Flickr).

These days, it’s managed as a nature reserve, and is no good for skating, partly because the winters aren’t cold enough any more, but mostly because it very seldom floods. So I snapped this picture after some heavy rain last week; it’s the nearest I’ve yet seen it come to being a skating rink again. There was a little ice around the edges…

Wouldn’t it make a great setting for a story, though?

On wintry nights, it is said that the ghosts of skaters past can sometimes still be glimpsed, twirling under the lamppost in the moonlight. The most beautiful, and the most graceful of all, is young Annie Crompton, a maid at one of the great houses nearby, who mourns the loss of her love, an adventurous lad who skated too far out onto the River Cam, fell through the ice and drowned. She circles endlessly, awaiting his return…

More photos of the meadows here.

Long-time readers may remember a post from a couple of years ago about Keith Loutit’s photos of Singapore, cunningly taken to make the city look like a model: 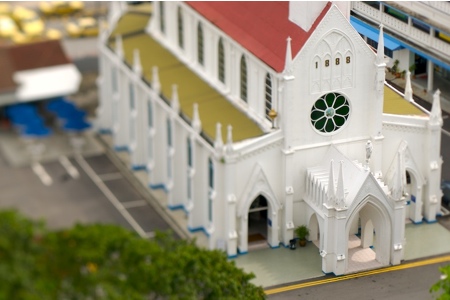 Well, as tends to happen in the digital world, what was a still image yesterday is a video today. Sam O’Hare has done a day in the life of New York City using a similar technique. Worth playing in full-screen HD if your connection will allow it.

The Sandpit from Sam O'Hare.

More information about how he made it here. It was launched a year ago, but these books come out first as a hardback and a ‘trade paperback’ – a large paperback almost as big as the hardback, sold chiefly in airports. Today, however, you can get a standard-sized, easy-to-read copy for the first time. I much prefer these, actually, to their bigger brothers.

You can buy it from Amazon UK here

Of course, the really exciting event for us comes at the end of this month when The Mistaken Wife hits the streets.

This church advertises ‘holy cross yelling’ – which must be pretty wild stuff in the life of English ecclesiastics! (The very pretty village of Yelling was on one of my weekend dog-walks.)

All must have prizes

I launched a new web site on Sunday, which has the potential to transform your marketing materials. It turns any ordinary idea, product or service into an award-winning idea, product or service! Just like that! Visit Awardify.com, the internet’s premier award-granting service! OK, in case you’re wondering, this was partly to make people think more about meaningless marketing phrases, and partly to experiment with how quickly and easily I could something like this using Drupal!